Brad Stevens on resuming the NBA season: 'We'd love to be back on the court' 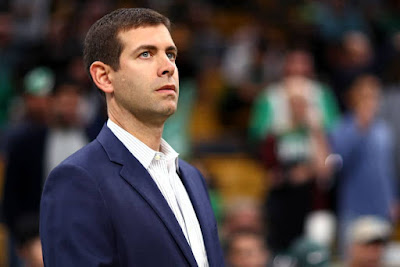 While the NBA season is still on hiatus due to COVID-19, Brad Stevens and the rest of the Celtics continue to play the waiting game.

On Monday, Stevens appeared on Kentucky coach John Calipari's "Coffee With Cal" show, to speak about how he's letting his players know that they should be "a week away from their best shape," in case league commissioner Adam Silver decides to resume the season that has been suspended since March 11.


"In an ideal world, I don't think there's any question, everybody associated with all these teams, especially with all of us that are in playoffs, we want to play," Stevens said.

The Celtics clinched a playoff berth the night they played their last game, in a 114-111 road win over the Pacers back on March 10.

The NBA was the first sports league in the U.S. to suspend games because of the coronovirus pandemic and after Rudy Gobert of the Utah Jazz tested positive. According to an ESPN report, Silver told owners and players last week that if the season returns, a neutral site and playing without fans would be one of the many conditions agreed upon beforehand, while the postseason would not be shortened either.


"I think the reality is, we all really trust [Silver] and his leadership and whatever that he decides through working with all of our specialists and scientists, all of the different groups that are discussing it, to make the right decision," Stevens said.

President of basketball operations Danny Ainge said he hoped to reopen the Red Auerbach Center (Celtics practice facility) sometime this week, despite Massachusetts Governor Charlie Baker not being clear on if sports would resume in the state anytime soon.


"W'd love to be back on the court," Stevens said. "We feel a responsibility to do your small part, and our small part would be to be a diversion or distraction for people that are facing real stressors in life. We'll follow Adam's lead and go from there."