Kevin Garnett to be inducted into Hall-of-Fame along with Kobe Bryant, Tim Duncan 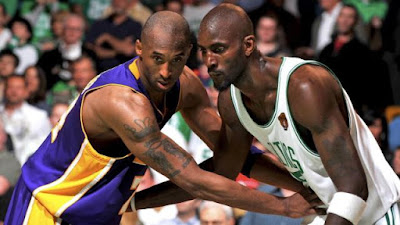 Celtics legend Kevin Garnett is officially going into the Naismith Memorial Basketball Hall-of-Fame, according to Shams Charnia of The Athletic.

The NBA is set to announce on Saturday that Garnett will join Kobe Bryant and Tim Duncan as part of the Hall-of-Fame class of 2020.


Kobe Bryant, Tim Duncan and Kevin Garnett will be inducted into the Naismith Basketball @Hoophall Class of 2020, sources tell @TheAthleticNBA @Stadium. Formal announcements will be made on Saturday.
— Shams Charania (@ShamsCharania) April 3, 2020


Garnett is a 15-time All-Star and  played 21-years in the NBA after jumping straight out of high school (Farragut Academy in Chicago). The 6-foot-11 power forward averaged 17.8 points, 10 rebounds and 3.7 assists in 1,462 games played. He was originally drafted by the Timberwolves with the fifth overall pick in 1995 and played 12 seasons in Minnesota, where he won league MVP in 2004.

Garnett, along with Paul Pierce and Ray Allen, won their first NBA title in their first season together in Boston during the 2007-08 campaign. It would be Garnett's only championship, while also capturing his only Defensive Player of the Year award in the same season, he would make 12 NBA's All-Defensive Teams during his career.

In six seasons with the Celtics, Garnett played in two NBA Finals and averaged 15.7 points and 8.3 rebounds per contest.

Garnett and Pierce were traded to the Brooklyn Nets in the summer of 2013, before "The Big Ticket" was sent back to the Timberwolves, where it all started midway through the 2014-15 season. He retired following the 2015-16 campaign.

The Celtics announced before All-Star weekend this past February that they would retire Garnett's number at some point next season.