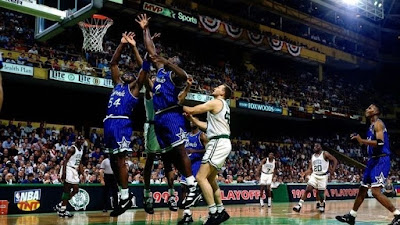 It was a staple of the city for decades, as Celtics fans would pack the legendary Boston Garden for home playoff games, making it a nightmare for any opposing team.

But as time changes so must everything else and the old Garden simply couldn't keep up, especially when it came to the outdated seats and other amenities. It was 25 years ago today that the Celtics would call it home for the very last time ever.

It wasn't how anyone envisioned the last Celtics game at the Boston Garden to be, but just as the days of Larry Bird and Big-3 were long gone, the finale served as a reminder that it was time to simply move on whether those wanted to or not.

In a down to the wire back and forth battle that gave the old Garden a proper send off, the Celtics were led by the veteran and Hawks legend Dominique Wilkins, who finished with 22 points and 18 rebounds.

Wilkins was definitely no stranger to big playoff games being played at the Garden as a visitor when he faced the likes of Bird, Kevin McHale and Robert Parish.

Sherman Douglas scored 21 points to go with 6 rebounds and 5 assists, while Dee Brown added 18 points, 5 assists and Dino Radja chipped in 17 points for the eighth seeded Celtics, who won only 35 games that season.

With 16.2 seconds left to play and a chance for the Celtics to extend their series to a fifth deciding game in Orlando, Wilkins missed the second of two free throws to tie the game.

Boston would have one last chance to tie and send the game to overtime, as Douglas got his 3-point attempt blocked as time expired.

Shaquille O'neal (25 points, 13 rebounds), Anfernee Hardaway (10 points, 13 assists) and Horace Grant (23 points, 10 rebounds) would lead the Magic all the way to the NBA Finals, where they would be swept by the Houston Rockets 4-0.

Tex Rickard, who was an entrepreneur and boxing promoter, built the Garden back in 1928 with close to the action seating, which turned out to be the NBA's biggest home court advantage for the Celtics come the postseason.

During the 1986 championship run, that many consider as one of the league's best teams ever, the Celtics finished 37-1 in the regular season and 10-0 during the playoffs (with an average margin of victory of  17.3 points per game) at home. They went on to raise their 17th and last banner in the same building that would be closed forever seven years later.

While the old Boston Garden has long since been torn down, memories of the Celtics winning championships and other sporting events that took place there will never cease to exist.