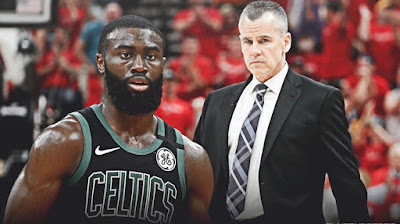 Jaylen Brown has never been short on motivation these days, as he was in the middle of a breakout year, when the COVID-19 pandemic suspended the NBA season.

Brown, who made an appearance on CNN earlier last week, then spoke to a group of students from the University of Massachusetts on Friday via Zoom. The Celtics guard told a story current Oklahoma City Thunder head coach Billy Donovan.

According to Brown who said he was "killing everyone," while a member of USA Basketball under-18 roster, coached by University of Florida's Donovan, refused to give a 17 year-old Brown more playing time during practice."


"He told me he wasn't playing me because he said I didn't play hard," Brown said, per Mark Murphy of the Boston Herald. "I said, 'What do you mean, I've been cooking everybody?' And he told me, 'You’re only going to be in the league for three years because you don't play hard.'

"And instantly I was emotional. I was 17 years old. I was like, 'What do you mean? I'm the best player here. I'm cooking everybody,'" Brown said. "I was so mad I was crying. But I think Billy Donovan had a big impact on my drive for sure. I'm in the NBA now, and hopefully I have a couple more years now to go, so we'll see."

While Brown was not happy with what Donovan's assessment, the Celtics guard clearly used it to motivate himself to keep working hard.


"I'm not cool with him to this day," Brown said. "For someone to say that was a lot for a 17-year-old. I appreciate the message he delivered, and to this day I kind of think about it, because that message was added to my work ethic."

Brown has already exceeded Donovan's expectations, as he's in his fourth season, averaging career-highs in points (20.4) and rebounds (6.4), while shooting 49 percent from the field and 38.1 percent from behind the arc. Clearly Danny Ainge didn't agree with Donovan's projection of Brown, after inking the Celtics rising star to a four-year, $115 million rookie extension last summer.

It remains unclear if Donovan's input was meant to inspire a young Brown, but it definitely built confidence that is more than evident in his development so many years later.


"What he meant by that, I realized as I got older, was that I wasn't playing to my potential," he said. "I was probably the best player there, but I wasn't applying myself as best as I could. I was using my talent to beat people, and I could have been outworking them as well. I kind of realized that when I got older, and I realized what that really meant, in terms of who I am and what life is about. Everybody has talent, but talent will only get you so far.

"That was his way, and I really didn't appreciate that at all. It upset me," Brown added.