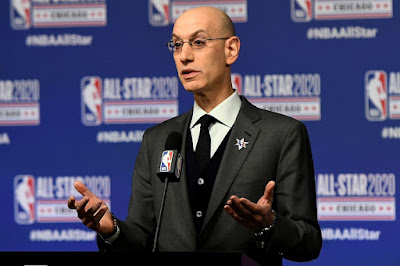 The NBA has put plans into motion on resuming the 2019-20 season following the league's board of governors' phone call with commissioner Adam Silver on Tuesday.

According to Adrian Wojnarowski of ESPN, NBA players (including Jayson Tatum) and members of the NBPA left "feeling increasingly positive about the league's momentum toward a resumption of play this season," after speaking with Silver.


"Owners and executives on the call were encouraged about the league's progress toward minimizing health risk upon a return and the league office's positive conversations with the National Basketball Players Association about the players' desire to eventually restart the season," Wojnarowski wrote.

Woj also reports, that the NBA plans to make a decision on whether the season, which has been suspended since March 11 due to the COVID-19 pandemic, will continue within the "next two to four weeks."

A number of safety factors would be considered including "standardized" testing for all 30 teams when it comes to the coronavirus and a "campus environment" where all teams would gather on a neutral site like Disney World in Orlando or somewhere in Las Vegas to finish the season.

It still remains unclear if all 30 teams will return to game action or if the playoffs would start immediately, with a possible play-in tournament to give teams on the bubble an opportunity to make it to the postseason.

League sources also told Wojnarowski that the NBA could have as much as 22 of it's 30 practice facilities open by next Monday.