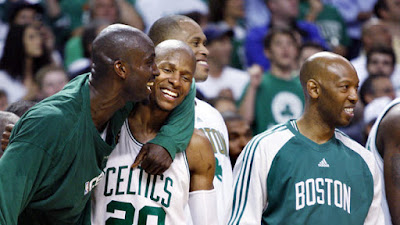 Tony Allen is the latest member of the 2007-08 championship Celtics team to voice his thoughts on the rift between Ray Allen and some of his former teammates and believes it's time to end the feud.

Tony Allen made an appearance on The Cedric Maxwell Podcast to speak about how the Celtics "Big-3" has still not reunited, due mostly to Ray Allen taking his talents to South Beach in 2012 -- essentially signaling the beginning of the end of the "Ubuntu" era.

While Paul Pierce has spoken to Allen within the last few years and forgiven his former teammate, it appears that Kevin Garnett and Rajon Rondo are one of the many that still haven't crossed that bridge when it comes to Allen deciding to team up with LeBron James and Dwayne Wade down in Miami.

Former Celtics guard Tony Allen says he understands why Allen left to the Heat which has led to the ongoing beef to this day.


"I heard both sides," Tony said to Maxwell. "Some guys felt [Ray] should've holla'd at them before he left, but we all know how tricky this business is. Upstairs management, he probably didn't see eye-to-eye with them and then turmoil with the teammates just gave him enough in his mindset to say I’m just as good enough to play with some of these other talented players which was the upcoming LeBron and Dwyane Wade guys ... I'm not mad at him, I'm pretty sure Ticket [Garnett] ain't mad at him, but we definitely need to get some type of reunion going."

Doc Rivers was interviewed by Jeff Goodman and Bob Ryan earlier this month about a long awaited Big-3 reunion that could possibly take place at Garnett's TD Garden jersey retirement ceremony, since that was not the case when Pierce had his numbered lifted to the rafters back in 2018.


"This one I take on myself," Rivers said on a possible Big-3 reunion. "I failed with the Paul jersey retirement. I really thought that Ray should have come to that and I tried to get him to. He wanted to, he was going to and he just didn't. We've got to get this one done. I think it would be magical next year when they retire Kevin's [Garnett] jersey.

"I think it would be absolutely magical to get him to come out. He would be shocked of the ovation he got. Listen, he left and I was mad at him, too, for leaving and leaving to our archenemy."

Ray Allen, who also appeared on Maxwell's podcast just a couple of weeks prior to Tony, reacted to those comments made by Rivers on possibly attending Garnett's ceremony in Boston.


"As far as me being there," Ray Allen said. "I think that is a subject that is really undecided yet. It would take Kevin (Garnett) and I to have a conversation moving forward. As you know when I left, I left as a free agent. I left because there were so many unresolved issues that the team wasn't considering or willing to change. As a free agent, you want to know that the team is going to do things you know they need to do."

Garnett, who is officially going into the Hall-of-Fame class of 2020, will have his number retired by the Celtics sometime next year, but not before being enshrined in Springfield, MA within the next few months. So there's always a chance the much anticipated Big-3 reunion could happen sooner rather than later.

Either way, Tony Allen is confident that a 2008 Celtics reunion that also includes Ray would mend fences and its way overdue at this point.


"You look at all these other championship teams that come back, reunite and things of that nature," Allen said. "The public eye really want to see you together, really want to see y'all in a picture together if anything. Just to kill all the noise for people like us to just stop even talking about it. I can't wait for one of those boys to have a dinner and it's gon' crack ... I just think we need to do that, make that happen, somebody set that up and nip it in the bud, man."


Listen to Tony Allen's full interview with Maxwell below: