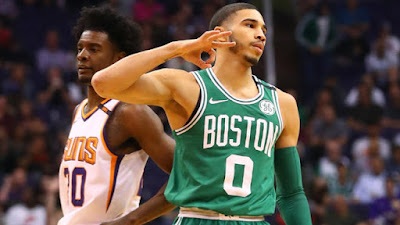 A pre-draft visit with the Phoenix Suns left quite an impression on Jayson Tatum, that the former Duke forward wasn't planning on going to a workout with Boston back in 2017.

During his appearance on the "All The Smoke" Podcast, which was released on Monday, Tatum detailed how he initially didn't want to be drafted by the Celtics despite learning that Danny Ainge had traded the No.1 pick for the No. 3 spot in the 2017 NBA Draft.

Tatum wanted to be selected by the Suns, who had the No. 4 pick, before a phone call from Duke coach Mike Krzyzewski, convinced him to visit Boston for a workout.


"So I get back to my hotel [in Phoenix], I'm about to fly back home for like two days before I go to New York [for the draft] and my agent called me and he's like, ‘Danny Ainge called and said they're going to trade their [No. 1] pick, they're going to go to 3 and they want you to come to Boston the next day to work out,'" Tatum recalled. "I'm like, 'No, I don't want to go to Boston. I like it out here in Phoenix. It's cool. The weather is nice. I get a big house, I get a pool, my mom is going to be out here.' [Tatum's agent was] like, 'Brad Stevens is a great young coach and they have a great history.' I'm like, 'I'm not trying to hear that. I want to go to Phoenix.'

"My agent was like, 'Just think about it.' So we hang up, I’m like, 'I'm not going to this workout right now. I'm cool.' But then Coach K called me right after my agent did and he was like, 'Jayson, the Celtics called, they want you to come work out. I think Brad Stevens is a great coach and it's a great place to be. You'll learn a lot.' So I'm like, 'Ugh, all right. I'll go.'"

The 2016-17 Celtics finished with the Eastern Conference's best record during the regular season and were fresh off a trip to the East Finals. Tatum saw a better chance to make an immediate impact teaming up with Devin Booker in Phoenix rather than possibly not seeing much playing time with a contender like Boston.


"There was a part of me that didn't want to go to Boston because they just were the No. 1 team in the East, they had Isaiah Thomas, Al Horford, Smart, [Jaylen Brown], Jae Crowder," said Tatum. "I was like, 'Man, I'm not going to play. I'm trying to get buckets.' Everything worked out. It was the best decision, so it worked out."

Tatum would end up not only seeing the court plenty during his rookie campaign, but the forward led the Celtics to a near NBA Finals berth (taking full advantage of injuries to Kyrie Irving and Gordon Hayward) and became a first time All-Star this season. He admits that Boston was the right spot for him after two and half years of being in the city.


"It worked out really well. I've really enjoyed being in Boston so far," said Tatum. "Playing in the Garden is like no other place. The fans are amazing. Just looking up at the 17 championships that we have and all the great players that come before me. It's crazy."

Had it not been for coach K's phone call, Tatum would not have visited with the Celtics and possibly tried to maneuver his way to the Suns. The Celtics All-Star explained why he was so enamored with wanting to go to Phoenix at first.


"This is a week before the draft, I went to Phoenix just to meet with Earl Watson and talk to the GM and see the facility," said Tatum. "I didn't work out, I just went to go meet with everybody. I went to dinner with Earl, I remember he picked me up, he had a white [Mercedes-Benz] G-[Class] wagon, he drove me around, he showed me all the houses where the players live at. I called my mom, I'm like, 'Yo, I think I want to go to Phoenix.' Earl Watson was like, 'You come to Phoenix, you and D-Book, two light-skinned killers, I'm going to let y'all rock out.' I'm sitting in the car I'm like, 'Man this sounds good. Like, I think I want to come here.'"

Ex-Suns coach Earl Watson admits the feeling was mutual when it came to Tatum being on their radar big time back in 2017. So why didn't Phoenix push to try and snag the Duke product that could have altered the franchise?

According to Watson, it was team owner Robert Sarver who ruled against him when it came to Tatum and they went with Josh Jackson at No.4 instead of attempting to trade up with Boston.


"I was pushing Tatum," Watson told The Athletic's Jay King. "Like, we had to move up for Tatum, we had to get Tatum. And ownership chose Josh Jackson.

" … I knew the two players were dynamically different, but my vision was what’s the best fit for Devin Booker. Booker and Tatum, I think a combination like that right now would have been completely different than anything in the NBA at that age."

Here’s Jayson Tatum talking about how he really wanted to end up in Phoenix pre-draft. pic.twitter.com/DMQZXu3tt7
— Zona Sports (@AZSportsZone) May 11, 2020


In hindsight nearly three years later, Josh Jackson cancelled his workout with the Celtics and Tatum nearly did the same thing, just days before the draft. That might have made all the difference when it came to Ainge deciding to go in a different direction and the Suns having a chance at grabbing Tatum if he was still available at No. 4, instead of Jackson.


"I told (Tatum) it was limitless," Watson said. "I had no problem building through him and Booker and playing the type of basketball where everyone touches it and moves it and swings it around."

Watson explained how he had several "uncomfortable" conversations with Sarver when it came to debating Tatum vs. Jackson, going on to say that at one point he told the Suns owner, "We need to f---ing get Tatum."

But instead, the Celtics selected Tatum at No. 3 after coach K convinced his former forward to go workout in Boston, while the Suns grabbed Jackson at No. 4 only to trade him two years later after not meeting their high expectations.

History would have been completely different for both teams had a certain phone call were not made to Tatum on that faithful day back in June of 2017.