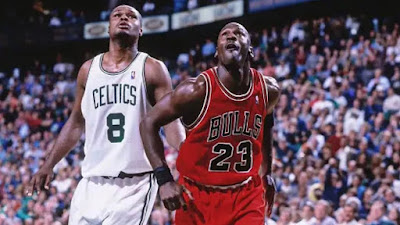 For one night, it appeared that the Rick Pitino Era was off to a great start, as the Celtics beat the defending NBA champion Chicago Bulls on opening night of the 1997-98 season.

The Celtics, who had the league's youngest roster at the time, got the best of Michael Jordan on Halloween in a 92-85 win at the then Fleet Center, during a nationally televised broadcast.

Future first time All-Star Antoine Walker would lead all scorers with 31 points on 13-of-26 shooting, to go along with 8 rebounds and a game-high 5 steals.

Rookie Chauncey Billups finished with 15 points, 4 assists and 2 steals off the bench in his NBA debut, while Boston's defense limited Jordan to shoot just 7-of-23 from the field. Pitino's first game and win as the Celtics head coach gave fans hope if only for one night.

"The Last Chance" Bulls were without Scottie Pippen, who was rehabbing from ankle surgery, but it was an out-of-shape Dennis Rodman who was Chicago's only player to finish with a positive plus/minus rating of +6 (9 points, 10 rebounds off the bench) that night.

ESPN's documentary on the 1997-98 Bulls obviously didn't dive at all into this huge win for the Celtics, but it was a reminder of how even for just a moment Boston could play spoiler to what many believed would be Jordan's last season in the NBA at the time.

Despite Jordan finishing with 30 points (16-of-21 from the free throw line), no other Bulls player scored more than 13, as the Celtics rallied from an early 20-point deficit, chipping away and playing that famous Pitino press defense.


"For me, it was unbelievable," said Walker. "To have an opportunity, to beat Michael Jordan, to beat the Chicago Bulls, a team I had rooted for, knowing that my whole family and friends were watching this game on national TV, it meant the world to me.

"I was just excited about the season. But the reason we were able to come back and make that run, it was about training camp. Having fresh legs, being in great shape, continuing to put pressure, apply defensive pressure to a team that was more older savvy veterans. I think our youth and athletic ability took over at the end of the night."

Though the Celtics were the first to hand the Bulls a loss, which eventually led to a 8-7 start to the 1997-98 campaign for the champs, Boston would go on to trade their third overall pick in Billups by the February trade deadline.


"I didn't know that Coach was going to be so impatient. I think impatience really hurt him. It hurt the organization, too," said Walker. "I played with so many different players over a two-year span. I think that was probably the downfall of it. Not letting the situation and players develop.

"Case in point: Chauncey Billups. You pick a guy third in the draft, he should be there for a while. Coach gave up on him at the All-Star break. I think those are the type of things that happen that really kinda crushed what we were trying to do and what he was trying to do."

The Celtics were 23-29 when Pitino pulled the trigger to bring in veteran Kenny Anderson and Walker at times plays the "what if" game when it comes to his coach giving up so quickly on Billups, who eventually became "Mr. Big Shot" years later.


"I loved Chauncey,” said Walker. "The reason why I loved him is because he's a big guard that could shoot the basketball. He played the game with very good pace. I thought he could be a star in this league. I thought we meshed really really well.

"I thought he was going to be a great complementary guard. Unfortunately, it didn't last long. Pitino had...Kenny Anderson was a kid that [Pitino] saw blow up and play in high school and I guess recruited him. … Coach loved Kenny Anderson and the opportunity was there for him to get him. Probably the downfall of Rick Pitino, just the impatience of letting guys develop and he wanted to win right away."

Boston would go on to finish the year 36-46, the most "successful season" of Pitino's tenure as the Celtics head coach and president of basketball operations, while the Bulls went on to win their sixth championship while posting a 62-20 record.

Three in a half years later Pitino would resign after never reaching the playoffs once and or clinching a winning season. But for one night Celtics fans had hope of a brighter future that otherwise had been dark for most of the 1990's.