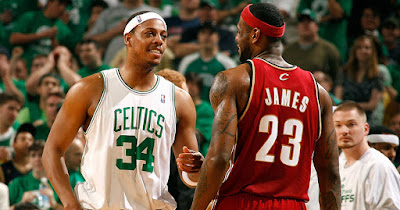 It was one of the many chapters in the saga that was the Paul Pierce vs LeBron James rivalry that lasted well over a decade.

In their first postseason battle, LeBron James and the Cavs were the reigning defending Eastern Conference champs, while Paul Pierce was on his way to the NBA Finals to raise a 17th banner for the Celtics -- their first since 1986. It was 12-years ago today that the stage was set for a winner take all Game 7 at The Garden.

James went 14-of-29 from the field (48.3 percent shooting) for 45 points, to go along with 6 assists and 5 rebounds. Delonte West was the only other Cavalier to score in double-figures with 15 points. Paul Pierce on the other hand, finished with 41 points, while shooting 56.5 percent from the field (including 4-of-6 from behind the arc) and 11-12 from the free-throw line, as the Celtics outlasted the Cavaliers 97-92 to advance.

According to Boston Sports Info, this was only the second Game 7 in NBA history to have opposing players score 40-plus points.

Boston would go on to take care the Pistons in six games to advance to the Finals for the first time since 1987, and also beat their long time rivals the Los Angeles Lakers to capture the franchise's only championship in the past 34 years.

Pierce and James would meet one another in the playoffs on four more occasions before "The Truth" retired in 2017.