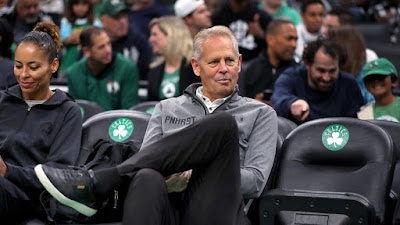 In the midst of this current COVID-19 pandemic, Celtics president of basketball operations hopes to reopen the Red Auerbach Center to his players next week.


"Massachusetts has been one of the slowest in opening things up, so our next phase is we'll open up our [practice] facility," Ainge told ESPN's Zach Lowe. "We're hoping to do it next week."

Ainge's appearance on The Lowe Post Podcast, which was released on Thursday, comes on the heels of Massachusetts Governor Charlie Baker preparing to announce plans of reopening the state beginning Monday.

National Basketball Players Association vice president and Celtics guard Jaylen Brown, spoke to CNN on Wednesday about the NBA season resuming, which has been suspended since March 11 and a private conference call between league superstars that took place earlier this week.

Many NBA teams have already begun to let players back into their practice facilities for voluntary, individual workouts that follow league protocols. According to Ainge, coaches will have to wear masks and gloves, plus gyms must be disinfected after all workouts.

While Boston Mayor Marty Walsh, who hopes local professional sports teams could resume on a limited basis acknowledged Ainge's comments, he doesn't plan to lift the city's public health emergency next week. Despite the governor making his much anticipated announcement on May 18 about the first phase of the state's new guidelines, the Celtics will still have to wait before they'll know if they can return to business or not.

Ainge said he hasn't heard any concerns from his players, especially when it comes to resuming play and rules pertaining practice facility workouts


"I don't think anybody's afraid of that," he said. "If I said we're two or three weeks away from playing, I'm sure there would be some players who would have some trepidation, but I think everybody's just really anxious to play right now."

NBA owners and executives remain optimistic about the league returning following this week's conference call with commissioner Adam Silver, even Ainge agrees with all teams playing in one location such as Disney World in Orlando. Though the Celtics GM also understands that there is sill a lot uncertainty surrounding plans to resume or cancel the season.

Ainge also added how much he "absolutely" wants to finish the season.

Ainge noted that the stoppage has already complicated his offseason schedule including the draft and free agency, as he continues to work even with the stay-at-home advisory in place over the past two months.