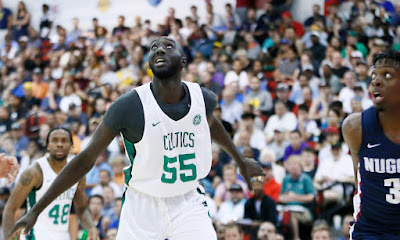 The Celtics have announced the signing of NBA Summer League standout Tacko Fall. The undrafted 7-foot-6 rookie center will have an opportunity to make the roster come training camp in September.

Adam Himmelsbach of the Boston Globe, reported that Fall's deal is still the original Exhibit 10 contract (a rookie minimum one-year deal worth about $898,310 if he makes the team) that he agreed to shortly after last month's NBA Draft, or a bonus if he signs with the Maine Red Claws for at least 60 days.


Per source, Tacko Fall’s deal is still an Exhibit 10 contract, just as he originally agreed to shortly after the draft.
— Adam Himmelsbach (@AdamHimmelsbach) July 25, 2019


Fall averaged 7.2 points on 77.3 percent shooting, 4.0 rebounds and 1.4 blocked shots in 12.6 minutes per game during Summer League in Las Vegas earlier this month, which led the Celtics to a 4-1 record.

The Celtics have also officially announced the partial guaranteed deal of wing Javonte Green, plus the two way contracts of rookie guard of Tremont Waters and Max Strus. Boston has one open roster spot up for grabs after waving big man Geurschon Yabusele, despite currently having 18 players signed, including two, two-way contracts (which doesn't count towards the league maximum of 15-signed players).

On Thursday morning the Celtics released a statement about finalizing a deal to purchase the Maine Red Claws of the G-League. The franchise out of Portland, Maine has been the Celtics' affiliate for over 10 years, since the team's inception.


"Over the years, the G League and the Red Claws have become increasingly important to the Celtics and our player development efforts," said Celtics team president Rich Gotham said in a news release. "We look forward to deepening both our ties with basketball operations and within the community, and further bringing the Celtics experience to fans in Maine."

"The Celtics have been great partners with the Red Claws over the last ten seasons. We are thrilled that the Celtics will continue to build upon the success we have had in making the Red Claws an important part of the Maine community," said Maine Red Claws Chairman and Principal Owner Bill Ryan Jr.