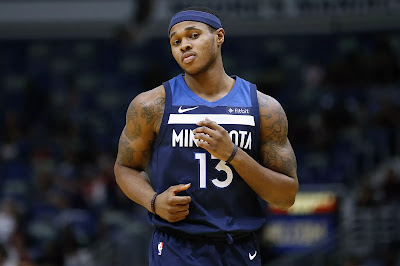 While Jabari Bird's future in Boston hangs in the balance, the Celtics worked out guard Marcus Georges-Hunt Tuesday.

According to Jay King of The Athletic, Georges-Hunt could replace Bird's spot on the team's 15-man roster. He played in 42 games last season as a member of the Timberwolves, while also spending time in the G-League.

Although Georges-Hunt doesn't have ja lot of experience at the pro level -- he averaged 1.6 points per game last season -- he's shown potential to be a solid 3-and-D guy for his versatility on both ends of the floor. Georges-Hunt averaged 16.2 points, 6.2 rebounds and 4.4 assists in the G-League.

If the Celtics ultimately decide to extend an invite to training camp to Georges-Hunt, it won't be his first one with Boston. He participated in the team's 2016 training camp before heading up to Maine where he spent the bulk of the past two seasons as a member of the Red Claws.

There has been no update on Bird's arrest. His arraignment -- originally scheduled for Monday -- has been postponed and he remains guarded at a local hospital but is still expected to be to appear in court immediately upon his release.