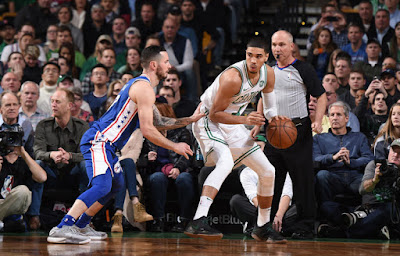 The 76ers were relentless, they were gritty and determined to pull off an upset at TD Garden Thursday night.

But when push came to shove, Kyrie Irving put the Celtics on his back whenever the 76ers crept back from a significant deficit as Philly was constantly reminded that they didn't have an answer for the best player on the floor. And guys like Al Horford, Jayson Tatum and Marcus Morris didn't make things any easier as they followed Irving's lead by finding their offense in the second half.

Although Irving wasn't the only one making an impact, his game-high 36 points certainly was the difference in the Celtics' 108-97 win over the Sixers. It was another brilliant performance from Irving, who meticulously attacked the Sixers' defense and what has turned into a regular occurrence lately -- finished the night with an above 50 percent clip (57.1).


"It's a luxury, not a lot of teams have that," Horford said after the game. "Just his will to win and make those shots when we need it most, just keeps impressing me game by game."

Horford also complimented his All-Star point guard on how he's able to create offense for others without necessarily dishing out assists, making Irving that much more challenging for opposing defenses.


"No question [he creates assists when he doesn't pass the ball]," Horford said. "He forces  a couple people and yeah, there are a lot of opportunities that he creates. If teams don't double him, he'll make them pay."

The Celtics took a 10-point lead into the second half before Philadelphia put together their best eight-minute stretch of the night, where they outscored their opponent, 23-13. It was a group effort out of the visiting team -- J.J. Redick drained a pair of 3-pointers as he poured in 9 points in the frame, while Dario Saric and Richaun Holmes combined for 8 before the Celtics eventually retaliated.

Boston went on a 9-3 run and eventually took a 76-71 lead into the final frame. From there, Marcus Morris poured in the rest of his 13 second-half points, Horford hit a big 3-pointer to open up a double-digit advantage, Tatum went 4-of-6 for 9 fourth-quarter points and Irving did the rest.

Saric's double-double (18 points, 10 rebounds) along with his 3-point shot (3-of-6) made an impact for the Sixers, and so did Redick's outside shooting (4-of-6) that led to his 17-point night. Every time the Celtics got off to a run to keep the Sixers at bay -- Philly turned to their outside shooters and they delivered -- sinking in half of their 32 attempts.

Timothe Luwawu-Cabarrot nailed three (3-of-4) from behind the arc and so did Robert Covington (3-of-10). Rookie of the year candidate Ben Simmons, who provided a little bit of every thing, was efficient on both ends of the floor. He finished with 15 points, 7 assists, 6 rebounds and 5 steals -- a very impressive stat line.

However, when it came to taking matters into his own hands and going toe-to-toe with one of the league's best closers, Simmons shied away from the challenge in the final frame.

Celtics will continue their five-game homestand Saturday in a matinee matchup against the Suns at TD Garden.

After committing 8 turnovers in 16 minutes, the Celtics controlled the pace of the game just in time for them to outscore the Sixers and grab a double-digit lead before halftime. Boston turned up its intensity on defense and finished with 19 forced turnovers while the offense shot 50.6 percent from the field.