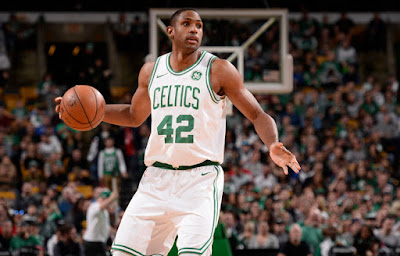 Very few NBA coaches can make do without their best player, never mind two of their best.

But that's exactly what Brad Stevens is doing. If there's one thing we learned throughout the Celtics' 95-94 win over the Raptors, it's the fact that Stevens is the biggest reason why his team is this successful, riding high off a 12-game winning streak.

As impressive as Friday's win over the Hornets was -- a game the Celtics won without Kyrie Irving and Al Horford -- Sunday's win was just as powerful.

Knocking off DeMar DeRozan, Kyle Lowry and the Raptors -- one of the best teams in the Eastern Conference -- proved just how deep the Celtics are. Lack of depth was a big concern after losing Gordon Hayward, it meant guys like Jaylen Brown and Jayson Tatum were going to have to step in and produce at a high level.

And that's exactly what they've done. But it's Stevens' system that's propelled the youngsters'  development. The defense will lead to offense approach has elevated the Celtics into being the top defensive team in the league and has led to offensive production from the starters to the second unit.

Five players scored in double figures, led by Al Horford (21 points) and Marcus Smart was efficient in leading the offense. He finished with 14 points and 9 assists. Brown got off to a quick start, scoring back-to-back jumpers in the first quarter and then made a steal that turned into an assist to Tatum for a loud finish.

Brown and Tatum combined for 31 points on 14-of-30 shots while Brown made key stops down the stretch that resulted in a hard-fought win. After Tatum grabbed a critical rebound off a DeRozan miss, he was whistled for an offensive foul that gave the Raptors another chance to win the game.

The Raptors turned to DeRozan yet again, and it was Brown's one-on-one defense that contested his potential game-winning jump shot to bounce off the rim seconds before the game clock expired. Stevens has preached how the Celtics' defense will propel his team's offense and it's been the difference in tight games like we saw on Sunday.

The effort from guys like Brown, Tatum and Terry Rozier (16 points, 6 rebounds) -- who turned in another impressive stat line -- has made a difference. We're seeing that effort resonate on the defensive side, where guys like Horford, Aron Baynes and Daniel Theis have shined throughout the win streak.

DeRozan's game-high 24 points led the Raptors. Kyle Lowry finished with 19 points and 7 assists, and C.J. Miles chipped in 10 points along with a game's best plus-17 rating.

For two straight games, the Celtics have had to win without their best guy, Stevens has gotten his guys to make up for the loss of Irving's production and made it look easy.


"These guys are all professional basketball players, they're all really prideful. They all believe in themselves and rightfully so. The key is to just kind of do what you do best. We're not gonna make up for Kyrie Irving by somebody trying to be Kyrie Irving. We just have to all chip in and count for him as a team."

No word if Irving will be in action against the Net in Brooklyn of Friday, if so, the Celtics will have to do without him for the third straight game where they will look to stretch their winning streak to 13 games before facing the champion Warriors at TD Garden on Thursday.

Celtics finished with a plus-10 in rebounding (46-36); led by Aron Baynes and Daniel Theis, who each pulled down 8 and Terry Rozier (6). Boston is currently the fourth best rebounding team (56.4) in the league.