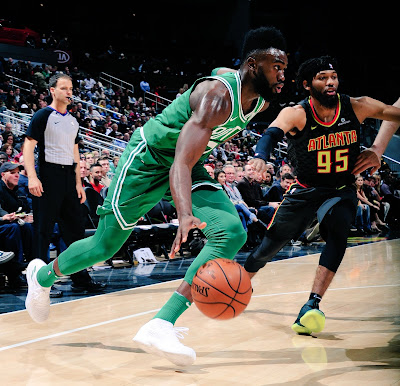 Jaylen Brown followed up his 22-point night against the Warriors by setting a new career-high, 27 points on Saturday. Brown and Irving combined for 57 points, as the Celtics beat the Hawks at the Philips Arena 110-99, to extend their win streak to 15 games.

It's been a tough week for Brown, who lost his best friend Trevin Steede suddenly on Wednesday night, he has found the inspiration to score a total 49 points in the last two Celtics wins.


"He's not alone," Irving said of his teammate Brown. "That's the spirit in the truest form. (Brown) may not say much but he knows we're all here for him."

Meanwhile, Irving went 10-of-12 from the field and hit the 30-point mark for the second time this season and against this same Hawks team, as the Celtics rallied to erase a 16-point deficit and defeat Atlanta, who are now at the bottom of the Eastern Conferance at 3-13.


"Most of us have never been on a winning streak like this," Irving said after finishing with 30 points, 5 assists and 4 rebounds. "I don't know if we even know how to pay attention to all the hoopla that goes on in terms of the excitement of it. I just think that every single game we take it as a challenge."

Brown hit a go ahead 3-pointer midway through the third quarter to give the Celtics their first lead of the game, marking the fourth time that Boston has trailed by at least 16 points during this current streak.

Marcus Morris and Jayson Tatum (6 rebounds) each contributed with 14 points a piece for the Celtics.

Dennis Schroder led the Hawks with 23 points and 9 assists, while Kent Bazemore added 19 points and John Collins chipped in with 18 points and 7 rebounds in the loss.

Boston lead's the NBA in overall defense but allowed Atlanta to score 35 first quarter points, as the Hawks used a 16-0 run and a 15 point advantage heading at the end of the period.

The Celtics would cut the lead to four on a few occasions, led by Marcus Smart (10 points, 4 rebounds), while Boston held the Hawks to 15 points in the second quarter.


"I think the biggest thing is that we can't keep digging these holes," Boston coach Brad Stevens said. "We need to put an emphasis on playing with pace and getting the ball to the other side of the floor."

Both team shot 47 percent from the field, but the Celtics hit 16-of-34 three-point attempts and the Hawks only made 9-of-24 from behind the arc, which made the difference especially in the second half for the visiting team.

The Celtics are now 15-2 on the season and will look to extend their streak to 16 straight wins, as they travel to Dallas to take on the 3-14 Mavericks on Monday night. Tip-off is at 8:30 from the American Airlines Arena.

The Celtics outscored the Hawks, 36-27 in the third period -- most points scored in a quarter by Boston this season. The Celtics also outscored Atlanta, 66-49 in the second half.