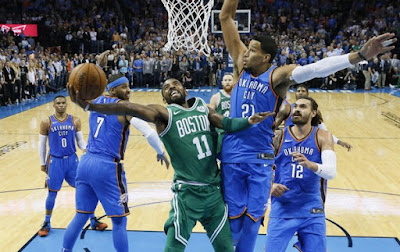 The Celtics have officially put the NBA on notice.

Not only do they have the best record in the league (7-2), but the Celtics turned in their most impressive win of the year on Friday in Oklahoma City. Boston turned an 18-point deficit into a 101-94 win over Russell Westbrook, Paul George, Carmelo Anthony and the Thunder.

In their seventh consecutive win -- longest winning streak by any team this year -- the Celtics looked like a team that was a cut below their opponent in the first half. They scored less than 40 points, couldn't slow down reigning MVP, who had 12 points and 7 assists while Kyrie Irving and Al Horford combined for six points.

The Thunder took a 55-37 lead into the second half, and that's when things got interesting. The Celtics defense tightened up on OKC's 'Big Three,' the offense found its rhythm and from there they began to climb out of their 18-point hole.

Making his regular season debut, Marcus Morris was a force on the defensive end along with Aron Baynes in the front court and Marcus Smart locked down the back court. Irving found his groove offensively, attacking Westbrook in what was a great point guard duel and poured in 9 points before the start of the final frame.

The C's trailed by a basket before rookie Semi Ojeleye's nailed his only points of the night -- a 3-pointer that knotted the game at 79. From there, Horford and Irving opened up on the Thunder, exchanging 3-pointers and hitting open shots.

Irving's highlight of the evening certainly came in the fourth quarter when he made one of the most rarest plays you'll see in basketball -- a five-point play. Irving got the and-1 from behind the arc, missed the free-throw but grabbed his own miss and hit the put-back, topping off a 14-4 Celtics run and extended their lead to six (87-81).

Horford scored 13 of his 20 points in the fourth quarter, including 4-of-4 from behind the arc and Irving finished with a team-high 25 points. Jayson Tatum added 13 points, 6 rebounds and Jaylen Brown reached a double-double (10 points, 12 rebounds).

Each member of OKC's Big 3 notched a double-double; led by Paul George's 25 points, 10 rebounds.  Russell Westbrook (19 points, 11 assists) and Carmelo Anthony (10 points, 14 rebounds) certainly stuffed the stat sheet but went ice cold from the floor, especially when their teammates needed them most -- in the fourth quarter.

Westbrook and Anthony combined for 10-of-37 from the field, while Westbrook committed half of his team's dozen turnovers.

After shooting 1-of-9 in the first half, Irving -- alongside Horford -- closed out the Thunder in the fourth quarter. Big Al caught fire from deep, connecting on three straight 3-pointers, including a dagger that came from Irving (6 assists) and found the bottom of the net with 41 seconds left (97-91) and made it a two-possession game.

The Celtics will look to make it eight in a row on Sunday when they head to Orlando to take on the Magic, the second stop of their three-game road trip.

In the face of adversity, the Celtics rose to the challenge against a Western Conference team that's projected to be a threat to the champion Warriors this year. The fourth quarter from the Irving-Horford duo certainly stood out the most from Friday night but the stifling team defense cannot be overlooked by this up-and-coming squad.

The Celtics now lead the league in defensive efficiency (0.951) and in fewest points allowed per game (93.8), per teamrankings.com.