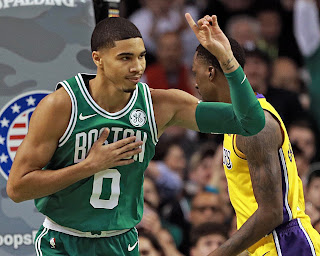 The Celtics are currently on a 10-game winning streak after beating the Los Angeles Lakers at TD Garden on Wednesday night.

Boston announced hours before tip-off that Al Horford entered the NBA's concussion protocol after the big man woke up with a headache that morning and did not play against the Lakers.

Jayson Tatum left midway through the second quarter against the Lakers with a right ankle injury and did not return after being treated on the bench by the Celtics medical staff, leading to x-rays after the game.


“He asked to be taking out,” Brad Stevens said on the moment Tatum signaled to the bench. “He didn’t remember a specific incident.”

According to the team, Tatum has a sore right ankle and left the arena in with a walking boot as a precautionary measure. The rookie was due to undergo further tests, including an MRI, on Thursday.


Danny Ainge made an appearance on a CBS Sports Boston morning radio show as he spoke on the status of Tatum's ankle.


"(Tatum) just has, we're hoping, a soft tissue injury in the ankle joint,” said the Celtics president of basketball operations. “Which sometimes can take a while. We'll have a better feel of that when we get the images back.”

The Celtics are already without Gordon Hayward for the rest of the season, and despite the lack of bodies at the moment, Stevens says the team will take the proper steps to ensure everyone's healthy return.


“You feel for every guy in their specific injuries,” he said in his postgame press conference. “Until we have only four left, I guess we’re just going to keep playing.”


UPDATE: As of 8 PM, the Celtics have announced that Jayson Tatum's x-rays have come back negative, and is listed as 'questionable' for Friday night's game against the Hornets


#NEBHInjuryReport Jayson Tatum’s MRI results on his right ankle came back negative. He is questionable for tomorrow vs. Charlotte.
— Boston Celtics (@celtics) November 10, 2017