Celtics Pregame: Avery Bradley returns to Boston as a member of the Pistons 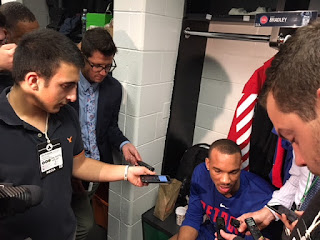 Although Avery Bradley knew there was a strong possibility that he would be dealt in light of the Gordon Hayward signing; it was still a tough pill to swallow.

The seven-year veteran spent his entire career in Boston, up until the point when Danny Ainge and the Celtics pulled the trigger on a swap that centered around Bradley and forward Marcus Morris.


"A lot of things [went through my mind]," Bradley explained. "Instantly I was like 'man, let me call my wife first, let me call my agent, let me talk to Stan (Van Gundy). But once I spoke to those three I felt a lot more comfortable and it started to settle in what was happening. So I was fine with it."

There were two contributing factors to what led to the deal for Morris, and they both go hand-in-hand. The biggest reason was Bradley's pending free agency in 2018 and the other was the fact that Boston had maxed out on their spending for Hayward, which made Bradley expendable due to the fact that the Celtics just wouldn't have enough money to sign him to the kind of max-money he's worth.


"[When] Danny [Ainge] basically told me that they were looking to pursue Gordon [Hayward], I instantly knew that there could be something that could happen with me or a few other guys on the team," Bradley said. "So I was just basically waiting to see what decision they were going to make. But I understood that they were going to make whatever was best for the Celtics, and I was going to respect that. I think me and Danny kind of communicated to one another so it made it easier."

Now as a member of the Pistons, Bradley has found a new home -- a place that he likes and feels comfortable in and the feeling is mutual. Pistons coach Stan Van Gundy described Bradley as a player who has not only met their high expectations but is the kind of player who puts in hard work and says he can't think of one negative thing to say about the former Celtic.

While most are wondering how weird it's going to be for Bradley to be playing as a member of the visiting team, Bradley says he feels great to be back at TD Garden and can't wait to play in front of the fans that adored him throughout his first seven years.


"It's just a great feeling to be back in the city of Boston, period," Bradley said. "I'm just excited about the game tonight to have a chance to play in front of the fans; it's gonna be a fun experience for me.

Bradley added that he's impressed how well the Celtics have played this year, specifically mentioning Jayson Tatum, Jaylen Brown and Terry Rozier. He still keeps in touch with most of his former teammates, along with members of the Celtics coaching staff.


"I looked it as all these years here helped me grow to a certain point throughout my life," Bradley said. "As a man and as a basketball player."