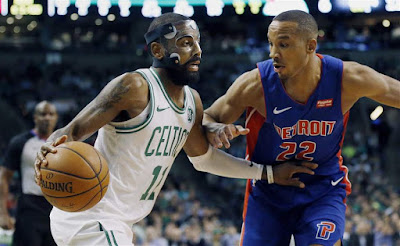 In a seesaw-kind of battle, critical errors towards the tail-end of the fourth quarter can ultimately decide a team's fate.

The Celtics found themselves on the wrong end of that seesaw as they teetered towards their first loss at TD Garden since the home opener on Oct. 18 against the Bucks.

After sinking in back-to-back 3-pointers that kept the game close, Marcus Smart committed a turnover on an inbound pass that led to a 3-point play for Andre Drummond which pushed the Pistons' lead to four (106-102).

Smart then committed another costly turnover -- which turned it into a six-point game with 3:08 left. From there it was all Detroit. The Pistons defeated the Celtics, 118-108. For a game that found itself tied 15 times throughout the stretch of 48 minutes, the Pistons remained poised throughout the second half.

Tobias Harris poured in 14 third-quarter points and finished with 31 to keep the Pistons ahead but it was the Celtics' outside shooting that pulled them into another tie game before the final frame. Smart hit a bank shot off the back board for a 3-pointer which was followed up by a corner-3 from Tatum -- propelling Boston to an 11-3 run.

Smart drained 6-of-9 from outside and finished with a team-high 23 points. Kyrie Irving added 18 points and 9 assists but was rattled throughout the night due to the defense of Avery Bradley.

Bradley's return to Boston was a strong outing -- defensively, he hounded the Celtics' back court while scoring 13 points and dishing out 5 assists. However, it was Drummond who shined the brightest behind his 26 points and 22 rebounds.

It was an entertaining first half as both teams went back and forth after the Pistons grabbed a quick double digit lead (20-10) midway through the opening frame. That lead quickly evaporated after the opening 12 minutes, thanks to a 10-2 Celtics run that kicked off a competitive second quarter between the two best teams in the Eastern Conference.

But the second half is when Detroit buckled down, and made the crucial stops they needed to make in order to close out the Celtics. Boston will continue their five-game homestand on Thursday when they host the 76ers at TD Garden.

Detroit's 118 points was the most points allowed by the Celtics this season. Boston also committed 17 turnovers, while the Pistons limited themselves to only 8.