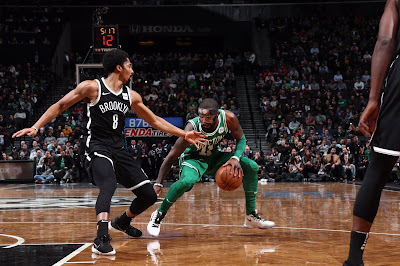 Kyrie Irving made his return to the lineup on Tuesday night, after missing the last two games with a facial fracture, to lead the Celtics to a 109-102 win over the Brooklyn Nets at the Barclays Center.

Irving, who has to wear a mask for the next two weeks, didn't let it affect his shot, as he finished with 25 points and 5 assists. Marcus Morris added 21 points and 10 rebounds in just his third start of the season. Jayson Tatum chipped in 19 points, while Al Horford recorded another double-double with 17 points and 11 rebounds to help the Celtics extend their win streak to 13 games.

Joe Harris led the Nets with 19 points, while Rondae Hollis-Jefferson added 16 points and 9 rebounds. Caris LeVert and Allen Crabbe each contributed with 15 points a piece for Brooklyn who are now 5-9 on the season.

After a 52-52 tie during intermission, the Celtics lead by as many as 13 points in the third quarter before the Nets used a 10-2 run to pull within one, 82-81 to start the final frame.

Brooklyn rallied once again and pulled within four with 3:40 remaining, which would be as close as they would get as Jaylen Brown (14 points, 4 rebounds and 3 assists) capped off the night, when he threw an alley-oop pass to Jason Tatum and put the Celtics up 106-96.

Irving seemed annoyed with his new face-wear, but is looking forward to his team's next challenge when they return home on Thursday night

"It's definitely an incredible streak we're on, and now comes the whole media frenzy of will the streak end, and what's going to happen on Thursday and the Golden State Warriors coming to Boston," Irving said. "So I'm looking forward to all that hoopla."

The Celtics are now 13-2 and will return to the TD Garden to host the NBA champion Golden State Warriors (11-3) on Thursday night. Tip-off is at 8 PM on TNT

The Celtics out-rebounded the Nets 59-48, but Brooklyn assisted 26 times on 39 made shot, while Boston only finished with 15 assists on the same amount of baskets made.

The Nets have lost six straight to the Celtics at home.