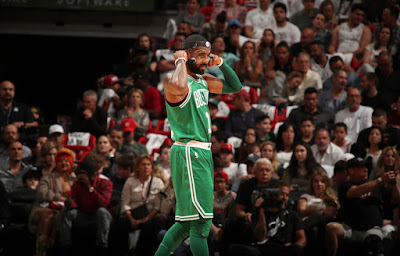 The winning streak is over.

After the Celtics put together the kind of run that was designed to erase a double-digit deficit in only a few minutes, Boston made crucial mistakes down the stretch and the Heat capitalized.

Miami closed the door on the Celtics in a 104-98 win, snapping Boston's 16-game winning streak.

Dion Waiters, who sunk in back-to-back 3-pointers late in the final stretch, led the Heat with 26 points and Goran Dragic led with a game-high 27 points.

Kyrie Irving reached 23 points, including a handful of points in the final minutes but it was too little, too late by the time the Celtics reached deep for late-game heroics. Jaylen Brown, who turned in 14 points, had a chance to pull make it a one-possession game when he made a turnover in transition.

The bad pass from mid-court set up a put-back layup for Hassan Whiteside which put the Heat up, 99-92, and Jayson Tatum's (18 points) big turnover the possession before that only made things worst. The rookie bounced the ball off of his leg while making a drive to the hoop, and gave the ball right back to Miami and they capitalized on it.

Marcus Morris kept the Celtics afloat in the second half. His 14 points led the bench and Marcus Smart facilitated the offense effectively in the third quarter while adding 7 points and four assists.

The Celtics will head home for Thanksgiving and host the Magic at TD Garden on Friday where they will look to bounce back from their loss.

Miami shot 49.4 percent from the floor, and sustained their efficient shooting thanks to Waiters and Tyler Johnson, who shot over 50 percent and poured in 16 points off the bench.