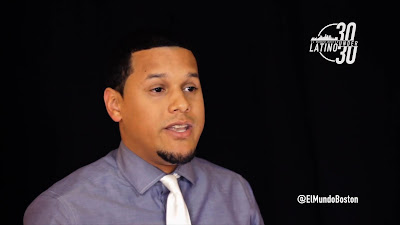 Causeway Street Founder, Josue Pavón has been selected by El Mundo Boston as one of 30 most influential Latinos under the age of 30 for 2017.

The second annal event, presented by Henessy VSOP Privilege, honors young individuals making an impact in the Massachusetts Latino community in a variety of fields including, Business, Sports, Community Service, and Fine Arts, among others.

The list honors and highlights the growing and invaluable impact of Latinos in Boston and around the state.

Josue, the son of Honduran parents, founded the Causeway Street Blog and Podcast at the start of the 2012-13 Celtics season, and started covering the team as a writer for WEEI Sports Radio Network at the beginning of the 2015-16 campaign and also became a reporter/contributor to the CLNS Media team in the same season.

Pavón recalls his love for the Celtics as a young fan fueled his drive to pursue a career where one day he could cover the team he grew up watching.


“It’s fair to say if you grew up a sports fan in Boston, there’s a team that you’re glued to,” said Pavón when he remembers watching the Celtics games religiously with his dad and brother as a kid.

His love for basketball and the Celtics took him to Springfield College (Springfield, MA), where Pavón studied sports journalism.

Last season Pavón made national headlines during last spring's Celtics playoff run (after Game 5 of ECQF), when he asked Chicago Bulls head coach Fred Hoiberg a question regarding comments he made previously about Isaiah Thomas not being called for traveling since he 'carries the ball' in mid-dribble.

Hoiberg gave an emphatic 'No' response and stormed off the press conferance stage, clearly mad about the question Pavón asked:


"Did you see Isaiah carry the ball at all in this game?" Hoiberg would abruptly end his presser without any further explanation.

Despite some negative reaction from the Twitter, social media world and even his peers in the press room, Josue stood his ground and says he wouldn't change anything about that moment, that went viral and got so much attention.


“I anticipated some sort of a remark that would show he was frustrated, but I didn’t anticipate him to walk off,” said Pavón, who recalled the other reporters at the time all turning to stare at him. Although it was difficult to hear accusations of him asking the question as a fan and not a journalist, Pavón said it was just a reminder of how difficult the job can be.

Today Pavón continues to be triple-threat when it comes to writing, running a weekly podcast and doing on-screen camera work year-round. The sky is the limit for this up-in-coming Latino, who is proud of his heritage and the road he’s taken to becoming a journalist.

Josue never takes for granted the opportunities he has been given to perfect his craft as he continues to grow as a broadcaster. He's just another example of how dreams can come true even in a  competitive sports media market city like Boston.


“[Boston’s] meant a lot to me because of how passionate the city is for sports,” he said. “To be able to provide [coverage] for kids that remind me of myself is an amazing responsibility.”

Pavón and 29 other young Latino leaders will be honored on Saturday, Nov. 11 at Royale Boston.