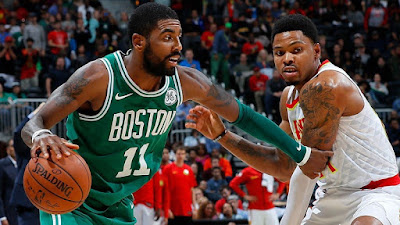 Throughout the first week of the regular season, many wondered when Kyrie Irving was going to grab control of a game and explode for 30-plus points. Irving turned on the cheat code at Philips Arena on Monday night, as the Celtics held off the Hawks in a 110-107 road victory for Boston's ninth straight win.

Irving led all scorers, while finishing with a season-high 35 points on 14-22 shooting from the field to go along with 7 assists. In just 24 hours after struggling to barely score 11 points (one point in the second half) in the Celtics' win over the Magic, the All-Star point guard bounced back, resulting easily in his best performance so far of the 2017-18 campaign.


"It's a beautiful game when it's played the right way," Irving said afterwards. "It's not going to look good every possession, but you've got to be able to move onto the next play. I understand that better than most."

Rookie Jayson Tatum added 21 points, including going 3-5 from behind the arc and grabbed 8 rebounds. Al Horford was one assist (9) shy of recording a triple-double, scoring 15 points, while taking down 10 rebounds for the Celtics, who now have the league's best at 9-2.

For the Hawks, playing on a second night of a back-to-back after coming off a huge win against the struggling Cavaliers, were led by Dennis Schroder's 23 points and 6 assists. Dewayne Dedmon notched a double-double of 19 points and 12 rebounds, while Marco Belinelli also chipped in 19 points on 6-10 shooting off the bench.

Atlanta's biggest lead of the evening came midway through the third quarter when they were up by seven, before Irving led a 16-2 surge back, where he either scored or assisted on every basket and the Celtics took an 82-75 advantage into the final frame.


"He's just very unique," Horford said of his teammate Irving. "He has a good sense of how teams are playing him."

Both Boston and Atlanta shot 39-81 (48-percent) from the field and turned the ball over 14 times apiece, but the Celtics won the battle of the glass 50-42.

The C's are on nine-game win streak and are the first team in NBA history to achieve such a feat after beginning the season 0-2.

The Celtics will seek to win their 10th straight when they travel home to take on the long time rival Los Angeles Lakers come Wednesday night. Tip-off is a 8 on ESPN.

Before Monday' nights meeting, Al Horford had only scored a total of 20 points and grabbed 17 rebounds in three games against the Hawks last season. The four-time All-Star spent the first nine years of his career in Atlanta before signing a four-year/$113 million dollar deal with the Celtics in the summer of 2016.

Aron Baynes started in place of Marcus Morris (knee) after Brad Stevens decided to rest the forward following playing in his only two games of the season against the Thunder and Magic. Morris should return to the C's lineup on Wednesday at the TD Garden.