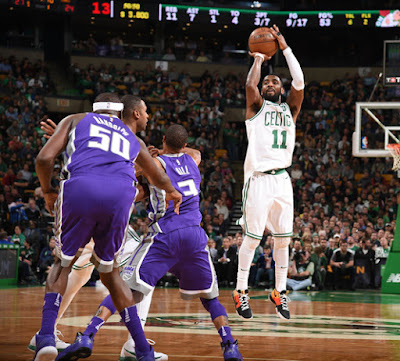 The Celtics are rolling right now, Boston steamrolled the Kings to their seventh straight loss while grabbing their sixth consecutive win in the process.

The league's hottest team blew past the Kings at TD Garden on Wednesday in a 113-86 blowout. For the first time this year, six players scored in double figures for the Celtics as the team was firing on all cylinders.

Kyrie Irving and Jaylen Brown combined for 44 points (22 apiece) in three quarters, leading the way for the Celtics and closing the door on any hopes from the Kings that they could stick around until the end. In what was the second unit's most impressive outing this season; Terry Rozier scored a dozen points, Daniel Theis notched a double-double (10 points, 10 rebounds) and Semi Ojeleye supplied the dirty work on defense while scoring 11 points on the other end.

Irving kicked off the third quarter with a performance reminiscent of Monday night's second half against the Spurs. He was responsible for the Celtics' first eight points in three minutes and stretched Boston's lead out to 16 (66-50).

He finished the quarter with 13 points and Brown poured in 10 -- they combined for 23 of the Celtics' 31 third-quarter points, outscoring the Kings' 15 points in the frame. By the end, the C's led by 29 and took the life out of Sacramento.

The Celtics will hope to carry their momentum to Oklahoma City where they'll battle the Thunder in what may be their toughest challenge of the young season.

The Celtics bench was big tonight -- they combined for 46 points -- including three players in double figures (Rozier, Ojeleye, Theis) and created defensive stops that prevented Sacramento from making a comeback. Boston made 40 field goals off of 30 assists, including 17-of-41 from deep.