Report: Celtics will not give up first-round pick for Jahlil Okafor 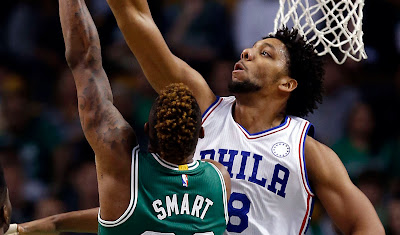 Jahlil Okafor wants out of Philly and the Sixers are currently shopping the big man without much response. It's no secret that Danny Ainge is a fan of the 21-year-old center and while he's been linked to the Celtics for a few seasons now, 'Trader Danny' will not look to move significant assets to try and acquire his services.

According to Gary Washburn of the Boston Globe, the Celtics are not willing to surrender a first-round pick for Okafor, despite Ainge seeing the disgruntled 76er as much more than a 'project,' that's still a high price to pay.


"Philadelphia does not want to buy out his contract and then watch him sign with a conference rival with no compensation. The Celtics have long held interest in Okafor, but as more of a project than an immediate contributor. Boston is also not willing to part with a first-round pick for Okafor."

The Celtics have a roster spot open, plus cap room to add a player via the NBA's disable player-exception, worth $8.4 million after Gordon Hayward's season ending injury. Though the Sixers will not grant Okafor with his contract buyout request, Boston could still swing a deal.

Okafor, who averaged 17.5 points and 7 rebounds per contest during his rookie campaign (2015-16), only played 50 games last season and managed 11.8 points per night in limited minutes mostly off the bench.

Boston could use a seven-footer, even if it's a rental for the rest of this season, additional inside presence would help the C's as they look to make a deep run through the East come playoff time.

The Celtics are currently on a seven-game win streak and Ainge is in no rush before a more attractive deal for Okafor hits his desk or cell phone. Either way it should be intriguing to watch in the upcoming weeks what Philadelphia will ask for in return from any team that's actually interested.