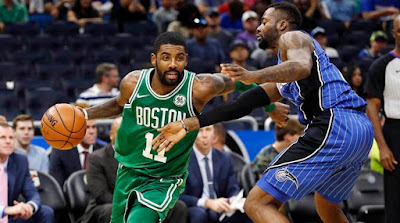 On Sunday the Celtics made it eight wins in a row after a 104-88 victory against the Orlando Magic. Six players scoring in double-figures helped Boston extend their winning steak and give the C's the NBA's best record at 8-2.

Jaylen Brown led the way with 18 points and 7 rebounds, while Al Horford recorded a double-double of 14 points and 10 rebounds to go along with 4 assists. Jayson Tatum added 13 points and Marcus Smart finished with 11 points, 8 rebounds and 8 assists for the Celtics.

Aaron Gordon finished with a double-double of his own (18 points, 12 rebounds) to lead the Magic, who are now 6-4. Jonathon Simmons chipped in 14 points and Nikola Vucevic also contributed 13 points, 10 rebounds and 7 assists in the loss at the Amway Center.

Boston only led by eight at the start of the final frame before Terry Rozier and Marcus Smart forced turnovers into points to give the Celtics a double-digit lead in a tight game, that turned into a blowout win.


"Their impact is huge, " said Celtics coach Brad Stevens. "I thought a big part of our playoff success last year was Smart and Terry coming off the bench together and that has been validated in the first couple of weeks of the season."

The Celtics got some much needed support off the bench (combined 36 points, 26 rebounds and 12 assists) especially from their back-court of Smart, Rozier (6 points, 7 rebounds) and Shane Larkin (6 points, 2 assists).


"We play really well off of each other," Smart said. "When Terry has the ball he can create for himself and when I have the ball vice versa. Me and Terry, we just complement each other."

The Celtics limited the league's best 3-point shooting team to 21-percent from behind the arc, while outscoring the Magic 27-19 in the fourth quarter to lead by as much as 23 to close out the game.


"We're in a good place presently but we understand there is still some things we can control on that end, some effort things as well as principle things," said Kyrie Irving, who struggled with a 4-13 shooting night for 11 points and 5 assists. "But we feel like we are in a good place, but obviously there is always room for improvement."

Boston will head to Atlanta to take on the 2-8 Hawks, who are coming off a win against the struggling Cavaliers on Sunday. Both teams will enter Monday playing a second night of a back-to-back, as the Celtics look to pick up their ninth straight victory. Tip-off is at 7:30 PM.

The Celtics are the only team in NBA history to go on an eight-game win streak after beginning the season 0-2. The C's have also held their opponents to under 95 points during that stretch. Boston won the battle of the glass against the Magic 63-52.

Marcus Morris made his first start of the season, scoring 12 points and grabbing 7 rebounds in 23 minutes of action. The Celtics forward is not expected to play Monday due to rest, after making his C's debut on Friday against the Thunder