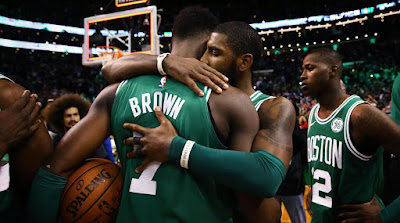 It was arguably Jaylen Brown's best performance as a pro when the second year swingman led the Celtics to a 17-point comeback in a 92-88 win over Golden State on Thursday.

Brown finished his night at the TD Garden with a team-high 22 points, 7 rebounds, 2 blocks and 2 steals as the Celtics extended their win streak to 14-games.

As basketball fans watched the 21-year-old on national TV play with the kind of inspiration needed to beat the NBA Champs, but none of us knew that Brown was playing with a heavy heart.

Less than 24-hours prior to tip-off, Brown received the terrible news that his childhood friend Trevin Steede had passed away.

While the immediate cause of death was unknown, Brown spoke with his friend's mother and her words convinced him that he should play in Steede's memory.


"My best friend passed last night. It was tough to kind of accept it," Brown said. "Everybody was kind of in shock. But I knew coming into today that he would have wanted me to play. It was hard getting my thoughts together, but after talking to his mom and his family, they inspired me to come out and play.

Brown later tweeted a recent picture in his honor of his friend after the game.


Almost immediately following the conclusion of the Celtics win, Kyrie Irving sought out Brown and gave him the game ball

Irving spoke about his teammate and how he tried to give him words of encouragement before the Celtics hosted the Warriors.


"I knew from the start of the game," said Irving afterwards. "I gave him some great words that was given to me. I've lost individuals in my life. It's never a good thing when someone else is going through it. You do your best to console and to encourage them, but at the end of the day, it's about the strength within themselves and he showed a lot of that tonight, to be able to go out there and perform the way he did, I knew exactly where the game ball was going to."


"[Steede] tells this story all the time: I transferred schools to play basketball at Wheeler High School. He was already there. And they transferred me in," Brown said. "Ultimately, I was probably taking his spot, but I remember I didn't have any friends sitting at the lunch table. The first few days I sat by myself and acted like I'm too cool, I didn't need anybody. You know what I mean? Like, I'm an introvert. I'll be all right.

His teammates were also proud at how Brown played through the adversity of losing his friend.

"I'm extremely proud of him," Jayson Tatum said. "He's a tremendous player and person, and coming in today was tough, but basketball is a good distraction. He went out there and gave us exactly what we needed."

Al Horford added: "Much respect for him, because that's difficult and he was hurting. He is hurting. It was one of those things where I didn't know if he was gonna play tonight, but it just speaks of his character. Some people deal with it different ways. Some people need to get away. He was able to put all that aside and play, so I'm very proud of him."