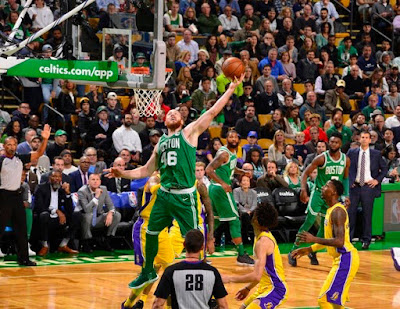 In a game where the Celtics stretched their winning streak into double-digits, an unlikely hero answered the phone when his name was called.

The Celtics, winners of 10 straight games, learned Wednesday morning that Al Horford had entered the NBA's concussion protocol and will be forced to sit out indefinitely. Brad Stevens inserted Aron Baynes into his starting lineup and the feisty big man did not disappoint -- he finished with a game-high 21 points on 8-of-12 shots and 8 rebounds -- leading Boston to a 107-96 win over the Lakers at TD Garden.

After falling into a 21-point first-half hole, the Lakers rallied back before halftime and challenged the Celtics throughout the third quarter, slicing their deficit to two points (76-74) midway through the frame. Kentavious Caldwell-Pope, who scored five consecutive points with help from Brandon Ingram, led an 11-2 Lakers run that ended with a Jordan Clarkson layup to pull Los Angeles to within a basket.

Boston retaliated with an 8-0 run that was kicked off by a Baynes hook shot. The Celtics let the Lakers hang around a bit as the second unit held L.A. off before the starters checked back in and sealed their tenth consecutive win.

Baynes was efficient throughout, hitting jump shots from inside the arc, banging down low and getting to the free-throw line -- where he made 5-of-8. He was also tremendous defensively, limiting the Lakers big men and clogged the paint while altering attempts at the rim.

Kyrie Irving finished with 19 points, 6 rebounds and 5 assists. Marcus Morris, who got the start at power forward, added 18 points and Terry Rozier's 14 points and 8 rebounds led the bench.

Ingram and Clarkson both led the Lakers with 18 points, Julius Randle added 16 points off the bench and Brook Lopez poured in 10 points.

The Lakers struggled in trying to contain Irving, who dribbled through their defense early and often. One of the most noticeable plays of the night was when he weaved through the defense like he was in the Skills Challenge at All-Star Saturday Night and the Lakers defense was the obstacle course.

One of the scariest moments of the night happened in the first half when rookie Jayson Tatum headed to the locker room to have his ankle checked out by Celtics trainers. X-rays were negative, he sat out the rest of the night and is scheduled to have an MRI Thursday afternoon.

The other scary moment came in the second half when Irving seemed to be experiencing discomfort on the bench -- trainers inspected his knee and after spending some time on the sidelines, eventually checked back in towards the end of the fourth quarter.

Celtics will look to stretch their winning streak to 11 games on Friday when they host the Hornets at TD Garden.

Celtics defense coerced the Lakers to commit 21 turnovers, including 8 steals. The Lakers made their first basket of the game three seconds in and never led again.

According to Danny Ainge, Horford's concussion isn't considered as serious as it was last year when the Celtics big man missed nine straight games but will of course be monitored closely.