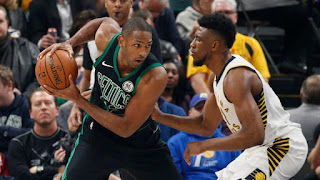 I don't think there's a better saying that could accurately describe the Celtics' first 18 wins of the season.

The come-from-behind win has been a common theme for Boston --  a team that owns the best record in the league -- especially throughout their recent stretch of games.

In their last five contests, the Celtics have outscored their opponents by an average of 7.2 points in the second half, including their comeback overtime win against the Hawks where they outscored Atlanta by 17 points. According to NBA.com, Boston is outscoring opponents by 16.6 points per 100 possessions in the third and fourth quarters this season.

The Celtics saw their 16-game winning streak snapped last week but have admirably bounced back by dishing out one of their few blowout wins of the season against the Magic on Friday and followed that up with an impressive win over Indiana. It was a dramatic win not only because the Celtics erased a double-digit deficit, much like they've done a lot this season, but it was rather exciting because of how they went about it in the second half.

In Saturday night's win over the Pacers, Al Horford caught fire after halftime when he scored 19 of the Celtics' 37 third-quarter points -- marking a season-high for most points scored in the third quarter by Horford and by his team. It was as if Brad Stevens gave Horford 'MJ's secret stuff' from the movie "Space Jam" before Horford added 19 to his 21 total points on the night and just like the rest of the Looney Tune characters did in the movie.

Terry Rozier scored 15 of his 17 points in the second half and Kyrie Irving added 10 as the Celtics took the life out of the Pacers' hopes of closing the gap in the final frame. It's been a consistent pattern for the Celtics and having one of the most efficient/top-15 scorers in the league in Irving certainly helps.

He shot 55 percent on Saturday, following up his 30-point performance against the Magic where he shot 60 percent on 9-of-15 shots.

The come-from-behind wins have been stacking up this year -- a testament of how well the offense can get going after halftime while the defense has carried Boston to a 18-3 start. The Celtics still lead the league in defensive efficiency while their offense in the second half have made them a tough team to beat, which was evident throughout their 16-game winning streak.

However, the majority of those 16 wins weren't blowouts. The Celtics find their offense in the third and fourth quarter and manage to squeeze out wins in the final frame, making Brad Stevens' point a fair one when he accurately described his team as a group that didn't play like a "16-game winning streak club" after their third loss in 19 games.

With the winning streak in their rear-view, the Celtics are transforming into a club that save their best for last. Regardless if their winning or losing at halftime, opponents should be prepared for a big-time second half from Boston each and every game.

The Celtics will have to improve on getting off to quicker starts night in and night out in order to find consistency throughout 48 minutes, and have the honor of watching 'Gino time' played on the jumbo-tron more often at TD Garden.