Celtics Pregame: Brad Stevens says his team is 'focused on now' rather than later 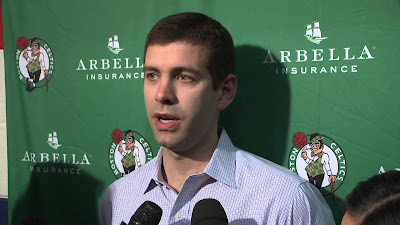 While Celtics head coach Brad Stevens acknowledged the fact that he is impressed by his team's quick 13-2 start to the regular season, he also knows that there's still a lot of work ahead of Thursday's showdown against Golden State.

The Celtics, winners of 13 straight, will take their first crack at the NBA champion Warriors at TD Garden. Warriors head coach Steve Kerr, who not only praised Boston for its winning streak on Wednesday, but went as far as calling Boston the team of the future in the east.

Stevens, who spoke to the media hours before tip-off, says he's flattered by Kerr's kind words but reminded the champion head coach that his team is building to compete now rather than later.


"First of all, I appreciate and obviously have a lot of admiration and respect for Steve. But the way that we look at it is -- we're focused on now," Stevens explained. "How can we be as good as we can today and work tomorrow to be a little bit better the next day. Our deal has always been focus on this process of growth, where it takes us, it takes us. We've been fortunate to start off the season well but we're not blind to the fact that we need to improve quite a bit."

Kerr, who expressed his enthusiasm over seeing his team take on the Celtics, reminded reporters before tip-off that while the Warriors always get the best out of every NBA opponent, facing Boston is slightly different.


"I told the guys the other night, 'Be ready, they're coming after us,' Kerr said. "And Draymond responded 'Well, who doesn't come after us?' He had a good point.

"The difference is these guys have the best defense in the league -- the best record in the league. So they're coming after us with a team that's loaded, has a lot of momentum and playing really well so it'll be a great challenge."

Kerr complemented Stevens on how smart and humble Stevens is and called it a good combination. The Warriors head coach described Stevens as "the guy who's the smartest guy in the room but doesn't have to tell anybody."

Stevens will look to outsmart Kerr and the Warriors on Thursday. Stevens knows that this season, which is the most impressive start of his NBA career, means nothing if his team doesn't improve between now and April.


"We have a lot of room to improve," Stevens said. "I don't think anybody after 15 games is what they're ultimately gonna be and I'm not worried about our record or anybody else's. I think we just have to focus on getting better."