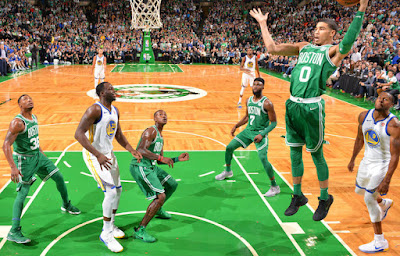 Thursday night, the NBA had an early season battle of the titans when the Warriors traveled to TD Garden to take on the Celtics. Golden State brought in the best offense in the league and coming off one of the most dominant championship runs in recent history look to capture a third title in four seasons.

The Celtics had surprised many after the loss of their prized free agent Gordon Hayward five minutes into this NBA season by winning 13 straight and toting the best record in the NBA at 13-2. These two teams were on a crash course for one of the most entertaining games of this young 2017-18 season.

They did not disappoint.

The Celtics were able to overcome a 17-point deficit... TWICE, over the course of the game to defeat the Warriors 92-88. The comeback was lead by Jaylen Brown in the third quarter, on his way to 22 points and 7 rebounds, but as Celtics fans have become accustomed to, Kyrie Irving took over at the end of the game. 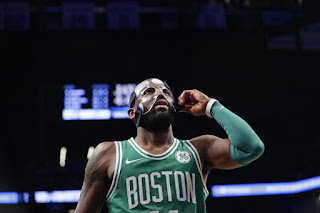 Irving, who battled his face mask for most of the night, struggled to find any kind of offensive flow as the game started. The Warriors game plan to get the ball out of his hands worked in the first half and visibly frustrated Boston's All-Star point guard and drove him to shoot only 4-16 on the night.

However, down the stretch Kyrie was relentless going to the hoop and made four key free throws to put the Celtics ahead and seal the victory for the green.


Jaylen Brown was really the story of the night for Boston though. He played his best all around game in a Celtics uniform on a night where his emotions were running high. Before the game, Brown learned that his best friend passed away the night before.

Not even sure if he was going to play, Brown did more than anyone could ever expect in that situation. Jaylen was relentless on defense and helped slow down the high scoring Warriors duo of Klay Thompson and Steph Curry to a horrible shooting night. When the Celtics were down by double digits in the third quarter, Jaylen Brown was noticeably the best player on the court. He scored 8 consecutive points, including two 3-pt buckets that sparked the comeback for the Celtics.

The Warriors who were visibly frustrated by Bostons swarming defense all night had one of their worst offensive performances since adding Kevin Durant to the team before last season. They came into the game averaging over 119 points per game and were held nearly 30 points under their season average.

Steph and Klay combined for 8-32 shooting and were ghosts in down the stretch. Boston's defense was put to the test, and they definitely responded.

So what does this mean long term for the Boston Celtics? They notch 14 wins in a row highlighted by this victory of over Golden State. Are they the hands down favorite to come out of the East? Was this a Finals Preview?  Do the Celtics have the Warriors' number?

More to come as the season plays out but one thing is for sure the Celtics made a statement to all the doubters last night they are here to stay. Ain't that right, Charles Barkley?

Boston will travel to Atlanta and take on the Hawks Saturday night for the second time in less than two weeks, tip-off is at 7:30.