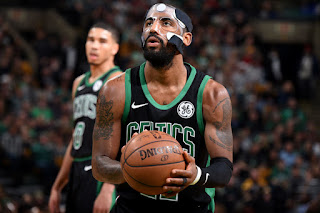 For a team coming off of their first loss in 17 games, the Celtics bounced back the way most anticipated they would; with a vengeance, turning in their best shooting performance of the season.

After the Magic led 4-0, less than two minutes into the game, the Celtics grabbed the lead and never gave it back. The Celtics routed their opponent, 118-103 and improved to 17-3.

Rookie Jayson Tatum got off to a hot start, scoring 8 points, including 2-of-2 from deep in the opening four minutes of the game. Boston finished the opening frame with 40 points on the board before the second unit held their own, taking care of the lead thanks in part to Terry Rozier's 13 first-half points along with Aron Baynes' defense in the paint to go with his six points.

Then the starters rode the wave -- they flirted with a 30-point lead throughout the final four minutes of the half and Kyrie Irving carried his offensive momentum for the Celtics' three-game road trip through the Thanksgiving break and into TD Garden. Rozier stuck around and hit back-to-back 3-pointers that helped widen the gap and the Celtics tacked on a season-high 73 first-half points with Irving leading the way with 17 points.

Irving finished the night with a game-high 30 points but more impressively; he only needed 15 attempts to get there. He shot 60 percent from the floor on 9-of-15 attempts. Rozier played second-fiddle with a career-high 23 points off the bench and Jaylen Brown finished with 13 points and a plus-20 game rating.

With a 99-69 lead through three quarters, the Celtics sat comfortably as Brad Stevens went deep into his bench in the fourth quarter. Orlando managed to cut their 30-point deficit in half but never got it into single-digit territory as the Celtics cruised to an easy win.

Next up for the Celtics will be the Pacers in Indiana Saturday -- the second night of a back-to-back.