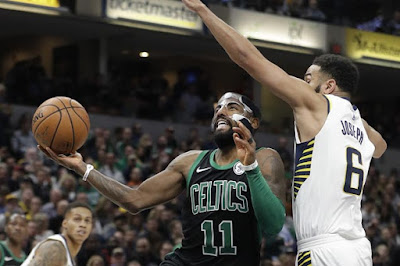 In what ended up being their highest-scoring third quarter of the season, the Celtics rallied back from a double-digit deficit to knock off the Pacers on the second night of a back-to-back set.

Al Horford was extraordinary, scoring 19 of the Celtics' 37 third-quarter points as Boston axed Indiana's lead in an 18-4 run. The Celtics took a 12-point lead into the final frame and cruised to a 108-98 victory.

Kyrie Irving scored a game-high 25 points and Horford finished with 21 points, 6 assists, five rebounds and three blocks. Terry Rozier carried over the momentum from his career night against the Magic on Friday by turning in 17 points off the bench and Aron Baynes added 8.

Marcus Smart, who got the start alongside Irving, replaced Jaylen Brown in the starting unit. Brown attended the funeral of his close friend and will rejoin the Celtics in Boston for their game against the Pistons on Monday.

Smart scored 15 points on 7-of-8 attempts to go with his 6 rebounds and five assists. He effectively picked his spots and did a great job of creating his own offense.

Six Pacers scored in double figures, including Myles Turner's team-leading 19 points and Domantas Sabonis' 17 points off the bench. However, Indiana never recovered from Boston's colossal third quarter as the Celtics stretched their lead to 15 points before the final buzzer. They also played without their best player in Victor Oladipo, who was ruled out due to a bruised right knee.

The Celtics will look to go for the trifecta on Monday when they welcome old friend Avery Bradley and the second-placed Pistons at TD Garden.

Hard to beat any NBA team when its shoots over 50 percent from the floor, especially the Celtics. Saturday night's win marked the first time this season the C's shot over 50 percent (56.3), including Marcus Smart's 7-of-8 from the floor along with Irving and Horford both making over half of their attempts. The duo combined for 46 points on 19-of-35 shots, including 4-of-8 from deep.