Celtics Pregame: Brad Stevens’ surprised by how well his team's defense is this early in the season 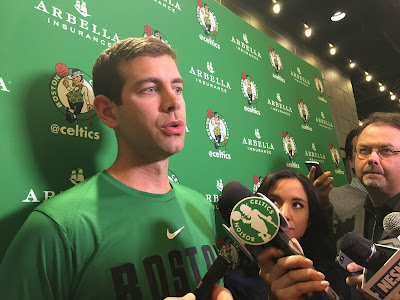 In case you haven't noticed, the Celtics have leapfrogged a dozen teams in your favorite NBA power rankings and it had little to do with how well they've been scoring.

Alright, maybe their scoring had something to do with how well they've been playing but for the most part, it's been the Celtics' defense that has stood out the most in their first seven games of the season. The Celtics are considered the best defensive team in the league right now and if you ask head coach Brad Stevens if he anticipated his team to defend so well this early into the season, he'll give you an honest answer.


"No," Stevens said before Wednesday's matchup against the Kings.

But of course, Stevens has been an NBA coach long enough to know that it's not necessarily how you start the regular season but rather how you finish at the end of 82 games.


"I thought we would be a very good defensive team if we play the right way. That's one of the things, we might stink at the end of 82 games on defense," Stevens said. "Who knows? Through seven games we're good. You know, you have to go out and do it every night. You have to build trust. You have to be loud, you have to communicate, you have to care about that end of the floor every day. And we really have a group that's committed to that."

Stevens mentioned Al Horford and Aron Baynes as the biggest defensive anchors of the starting unit, and pointed at the fact that Jaylen Brown and Jayson Tatum's size certainly helps buckle things down when it comes to making stops.

When asked about the bench players, Stevens talked about what Marcus Smart because it's a given but also brought up Terry Rozier -- stating the third-year guard has made big strides this season and is one of the guys who has impressed him the most.


"Marcus has always been a special defender. It's something that we've always known but I think the guy who's made tremendous strides is Terry (Rozier)," Stevens said. "His ability to be in the right place more often than not -- he's very consistent at guarding great shooters, he's very consistent at guarding guys that have the ball, he's able to get his body position appropriate so that he can direct them -- which is good. I thought some of his possessions against Ellington in Miami the other day was outstanding and his growth continues to rise [he's] been really good on that end. On both ends, but obviously on the defensive end."

The Celtics plan to carry their momentum Wednesday night against the Kings when they will look to extend their winning streak to six games.