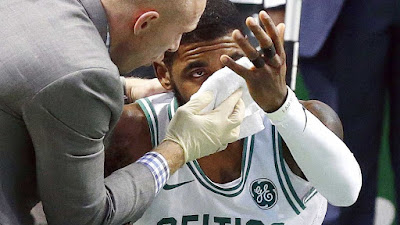 Kyrie Irving is listed as 'doubtful' for Sunday, when the Celtics take on the Toronto Raptors at the TD Garden.

Irving played just two minutes in Friday night's win over the Charlotte Hornets before taking an elbow to the face from teammate Aron Baynes and did not return, leading to the Celtics medical staff to monitor the four-time All-Star for a possible concussion.

The team announced on Saturday that Irving suffered a minor facial fracture and will be fitted for a mask, before possibly suiting up against Toronto.


Should Irving not play on Sunday, Marcus Smart would more than likely get the call to start at point guard for the Celtics, who immediately filled in for Irving against the Hornets. Brad Stevens could also elect to insert Terry Rozier or even Shane Larkin as possible starters as well.

Al Horford has missed the last two games after entering the NBA's concussion protocol and could make his return on Sunday. The Celtics upgraded his status to 'questionable' just hours prior to Friday's tip-off and now the C's big man is listed as probable against the Raptors.

The Celtics host Toronto on Sunday, beginning at 3 PM.