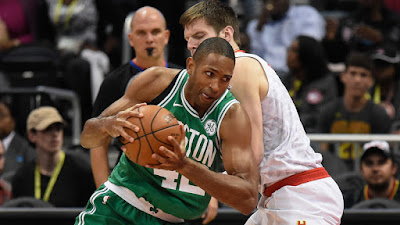 If the Celtics manage to stretch their winning streak to 10 games on Wednesday night against the Lakers at TD Garden, they're going to have to do it without their big man Al Horford.

Horford entered the NBA's concussion protocol on Wednesday morning after experiencing concussion symptoms. He suffered a blow to the head in Monday's 110-107 win over the Hawks when Kent Bazemore bit on an up-fake from Horford before striking the Celtics big man with his elbow on his way down.

Horford, who immediately fell to the ground after the hit, didn't experience any symptoms immediately after the hard play, according to the Celtics but has been ruled out indefinitely. This is the second time in two season that Horford has entered the league's concussion protocol.

One year ago, Horford was forced to miss nine games as a result of an early-season concussion. The Celtics will certainly miss his production.

He's gotten off to a quick start this year, averaging 14.6 points, 9.2 rebounds and 4.7 assists while providing stifling defense throughout the first 11 games of the season. Brad Stevens will lean on his second unit to replace Horford's production as there will be no timetable for when Horford will return to the starting lineup.

Brad Stevens told the media before Wednesday's game that he do whatever it takes to bring Horford along slowly and take the proper precautions to ensure his safety. The Celtics head coach will turn to Aron Baynes at center and says that Marcus Morris will start at power forward.

Stevens also added that there will not be a minute-restriction on Morris, per sea, but he will be monitored closely throughout the night.