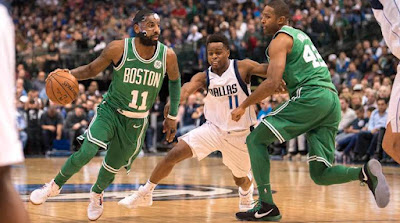 It was a foregone conclusion heading into the regular season that we would inevitably see epic performances from Kyrie Irving this season even though the Celtics have impressively been able to string together a winning streak without Irving scoring over 30 points.

Monday night was one of those nights.

After scoring 19 first-quarter points, Irving picked up where he left off in the fourth quarter when he led the Celtics from a double-digit deficit and turned in a career night. He helped end the Celtics' drought by creating stops on the defensive end and making plays from inside the paint and out behind the arc; ultimately salvaging one of the longest winning streaks in franchise history in a 110-102 overtime win over the Mavericks.

Jaylen Brown, who got off to a quick start, drained a 3-pointer midway through the fourth quarter and alongside Irving, led his team to a 12-2 run that pulled the Celtics to within three points (89-86) with 4:05 left in the game. Irving then converted on five consecutive points, including a 3-pointer that gave the Celtics their first lead since the beginning of the second half.

Dirk Nowitzki drained his signature elbow jumper that kept Dallas in it, and J.J. Barea hit a big layup to put his team back in front. However, whenever the Mavs attempted to seal the win, the Celtics made crucial defensive stops on back-to-back possessions, including a steal by Irving that led to a fast break alley-oop lob to Jayson Tatum and knotted things up at 96 apiece.

In the extra period, Dallas jumped out to a four-point lead before Irving took matters into his own hands -- pouring in 10 of the Celtics' 14 overtime points. His season-high 47 points carried Boston's streak to 16 consecutive games, the fifth longest winning streak in franchise history.

Brown (22 points) scored over 20 points for the third straight game and pulled down 9 rebounds, Tatum flirted with a double-double (15 points, 9 rebounds) and Marcus Smart, who had an awful shooting night (3-of-15) added 12 points, 8 assists and a pair of steals.

Harrison Barnes' 31 points on 10-of-21 from the field was nearly the story of night, he caught fire in the second half and was a key catalyst to Dallas' double-digit lead in the fourth quarter. Wesley Matthews finished with 18 points and Nowitzki notched a double-double (14 points, 12 rebounds).

The Celtics will try to reach 17 straight when they head to Miami on Wednesday night -- their third and final stop of their three-game road trip.

For the first time this season, the Celtics shot better than 45 percent (45.2) and a lot of that had to do with Irving and Brown's shooting efficiency. After Irving entered halftime nearly perfect from the filed (9-of-10), he finished with an eye-opening 72.7 shooting percentage on 16-of-22 shots, including 5-of-7 from deep.

As for Brown, he once again only needed 13 attempts (like he did in Atlanta) to score over 20 points. He shot 61.5 percent from the field on 8-of-13, including 3-of-6 from deep. The back court duo combined for 69 points -- they were responsible for more than half of the Celtics' total.