Warriors coach Steve Kerr praises the Celtics, calls them 'team of the future in the East' 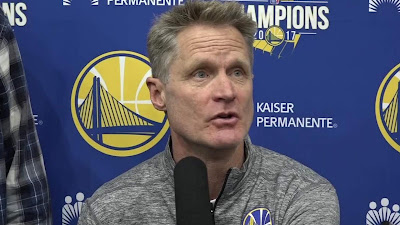 Golden State Warriors head coach Steve Kerr is either insulting his team's next opponent or trying to get them to feel over confident when he spoke about the Celtics on Tuesday.

The NBA champs will make their only trip to Boston tomorrow night to take on Kyrie Irving and company, who have the league's best record at 13-2.

The Celtics are on a 13-game winning win streak after losing the their first two back-to-back games to open up the 2017-18 season.

“They’re dialed in," Kerr, whose club will square off with the Celtics at TD Garden on Thursday, said. "They’re well-coached, obviously. Brad Stevens is amazing."

Golden State currently has a 11-3 record and while most still consider that they're best team in basketball, Kerr didn't stop short on his praise for the Celtics roster, including Danny Ainge's picks from the last two drafts.


"I think Jaylen Brown in his second year has made huge strides. They add Jayson Tatum, so you have another long-armed guy who can switch," Kerr noted. "And their bigs are really smart. Horford and Baynes are really sharp basketball players. They’re all on a string, they play off each other really well, they're sound, and they’re motivated.

"They’re a team that’s been on the rise the last couple of years."

Steve Kerr on the Celtics, who he calls "the team of the future" in the East pic.twitter.com/tGCoVbypWB
— Anthony Slater (@anthonyVslater) November 14, 2017


The Warriors and the Cleveland Cavaliers have met in the NBA Finals for the last three straight years and about a month ago nearly all analyst would agree that the same fate come fruition for basketball fans in June of 2018.

Though the Cavs and the Celtics decided to swap point guards, predictions remained the same. But now after 15 games, Boston is at the top of the East, while LeBron's team is barely a .500 squad and out of the playoff picture.

While Celtics naysayers wrote them off the moment the injury to Gordon Hayward occurred, Kerr knows better than to bet against Ainge, who has been building something resembling a contender to rule the Eastern Conferance for a a few years now, but it's clear the changing of the guard could come as soon as this season.


"It sure looks like Boston is the team of the future in the East with their assets they still have, their young talent, their talent, and Kyrie is amazing," said Kerr of the C's, who haven't loss a game since Oct. 18.

The Celtics are 2-4 against Kerr and the Warriors over the last three seasons, with the exception of one blowout loss at the Garden last season, every other game has come down to the wire, including the two Oracle Arena wins for Boston.

The two teams will take battle on Thursday night on TNT, beginning at 8.