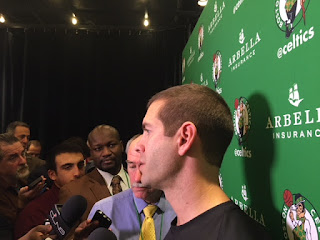 While the Celtics hold the best record in the Eastern Conference 22 games into the regular season, coach Brad Stevens is still trying to figure out a way to help his second unit reach its full potential.

In Boston's two previous outings, Stevens turned to a three-guard lineup to start the second quarter -- one that started with Kyrie Irving, Marcus Smart and Terry Rozier and ended with Semi Ojeleye and Daniel Theis. The trio led a 12-2 run to pull the Celtics from an eight-point deficit.

The first half woes have gone under the radar a bit, mainly due to a 16-game winning streak. But now that the Celtics are settling into the regular season, much like the rest of the league, Stevens is trying to get the most out of his bench play and is now mixing starters in with the reserves as a way to spark the offense.

Could Irving start the second quarter along with the second unit against the 76ers on Thursday night?


"Potentially. We did it in Indiana and it was good -- it wasn't as good in the second half but potentially, yes," Stevens said. "Because of the injuries that we've had early on in the year, I think we're still looking for the exact right times and places for every body but balancing that minutes portion of it as well, which is kind of a delicate balance right now. I want to make sure that we're playing well, as well as we can for 48 and certainly having Kyrie with the second unit or Al with the second unit is something that we're talking about a lot."

Stevens has alluded in the past that monitoring players' minutes is a priority this year, and that he will do his best to balance the two as the season progresses. The Celtics' second unit currently find themselves in the middle of the pact in points per game -- 16th in the league -- averaging 32.6 points a night.

Celtics head coach also isn't ready to call his team a contender, despite the impressive 19-3 record. It's still soon, even though his team put together the longest winning streak the league has seen so far, this season.

The Celtics will look to continue their five-game home-stand by bouncing back from their loss against the Pistons on Monday with a win against the 76ers.