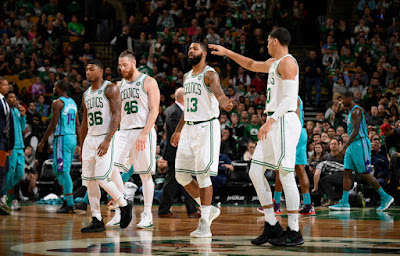 The Celtics rallied from an 18-point deficit to beat the Charlotte Hornets 90-87 at the TD Garden on Friday night.

Boston overcame the injury to Kyrie Irving (face), the absence of Al Horford (concussion) and being down 12-points in the fourth quarter to extend their win streak to 11 straight games.

Jayson Tatum, who was questionable before tip-off with a sore right ankle, finished with 16 points on 6-12 shooting from the field, while Shane Larkin also added 16 points (2-3 from behind the arc) in 17 minutes off the bench to lead the Celtics.


"We just got a lot of fighters, a lot of resilient guys," Larkin said of a team that's seen Gordon Hayward, Al Horford and now Irving hit with injuries.

"I'm always locked in. That's my job. I don't know when my opportunity's gonna be there," Larkin said. "Tonight I hit some shots early, coach kept rocking with me, so I tried to throw my best."

Kemba Walker led the Hornets, who are now 5-7, with 20 points and 11 assists. Frank Kaminsky ended his night with 14 points and Dwayne Bacon added 10 points and 4 rebounds in Charlotte's fourth straight loss.

Irving took an inadvertent elbow to the face by teammate Aron Baynes when he attempted to grab a rebound in the 10th minute of the first quarter. Irving immediately fell to the floor, bleeding from his nose and was escorted back to the locker room. The C's point guard was ruled out for the rest of the game and was monitored for possible concussion symptoms.

According to Larkin, Irving spoke to to team at halftime with the Celtics trailing 57-41 to the Hornets.

Charlotte pushed their lead to 18, the largest of the night, but Boston chipped the deficit down to 12 by the start of the final frame.

The Celtics would use a 16-3 run and a Jaylen Brown (10 points and 13 rebounds) go-ahead basket to grab their first lead with 4:05 remaining and never looked back.

Boston led by as many as five points, before a Kemba Walker 3-point play got the Hornets within one (86-85). Morris hit a 21-foot jumper out of timeout with 23 seconds left to play, only to have Walker respond on the other end with a driving layup to cut the Celtics lead 88-87.

With 15 seconds left, Rozier accidentally stepped out of bounce, giving the Hornets one more opportunity to take final shot to win, before Walker missed a step back 19-footer, giving the Celtics another home victory after Rozier hit three of his net four free throws to ice the game.

Boston shot 35.7 percent from the field and Charlotte hit 38.8 percent of their shot attempts.

The Celtics will look to extend their streak to 12 wins, when they host the Toronto Raptors on Sunday. Tip-off is at 3 PM.

Al Horford missed his second straight game with a concussion, despite the Celtics listing him as 'questionable' before tip-off. The C's forward could make his return against the Raptors. Kyrie Irving will be monitored for the next 24-hours for concussion symptoms, the point guard sent his teammates and Brad Stevens a group text following Friday's win.