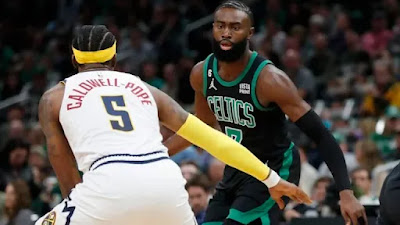 The Celtics have won five in a row following a 131-112 victory over the Denver Nuggets Friday night at TD Garden.
Jayson Tatum continued his offensive tear of scoring at least 30 in three straight outings (34 points on 11-of-21 shooting, eight rebounds), while Jaylen Brown netted 25 points on 11-of-15 from the field to go along with eight rebounds and eight assists.
Al Horford was 6-of-8 from 3-point territory to finish with 21 points, seven rebounds and Grant Williams added 13 points to help snap the Nuggets' four-game win streak and the C's improved to 9-3 on the season.
Playing without Malcolm Brogdon (hamstring tightness), Boston shot 55.6% from the floor, including 16-of-37 from behind the arc and only committed seven turnovers.

"It's just a lot of fun right now on the offensive end," said Al Horford in his postgame presser. "Guys are really conscious of understanding of what coach wants and what he expects. He wants good spacing and we're doing a good job of getting to those positions. It's fun to see when it comes together like that."

Nikola Jokic had 29 points on 12-of-20 from the field and Aaron Gordon had 17 points, seven rebounds. Massachusetts native Brue Brown recorded 16 points, 10 rebounds off the bench and Jamal Murray also recorded a double-double of 14 points, 10 assists for Denver -- who fell to a record of 8-4.
The Celtics led by as many as 18 in the first half and had a 66-57 advantage at the break. Jokic picked up his fourth foul with 7:03 left in the third quarter and the C's were outscored 21-20 the rest of the period.
Boston used a 14-4 run to begin the final frame to take a 111-95 lead with 8:29 left to play, before going on another 15-5 spurt to put the Nuggets away for good in the final 3:57.

"Our guys are bought into making each other better, whether they have the ball or not," said Celtics interim Joe Mazzulla.

The Celtics will head to Detroit to face the Pistons (3-10) Saturday on a second night of a back-to-back.