Sam Hauser provides another boost for Celtics on a career-night 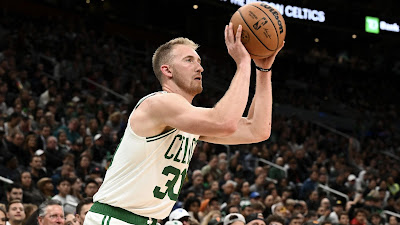 Sam Hauser has outdone himself once again, as he provided another spark off the bench in the Celtics' 128-112 win over the Detroit Pistons Wednesday night.
The second-year forward topped his career-high for a second time in three games, scoring 24 points on 9-of-15 shooting, including going 6-of-12 from deep.
While the focus was on Jayson Tatum and Jaylen Brown combining for 61 points and 21-of-39 from the field to go along with 7-of-17 from behind the 3-point arc, Hauser should also be credited for helping break the game wide open in the second quarter, as he also recorded a career-high of 32 minutes played overall as the Celtics' third leading scorer.

"Sam is a valued asset to our team, the way he spaces the floor, the way he shoots the ball, but also the way he reads the game," Brown said in his postgame comments. "Continuing to find ways to get him going and develop him, he can be a valuable asset down the line."

Hauser was able to score in the lane as well, especially in the pick-and-roll while cutting to the rim on a pair of layups and a floater -- something he seems to be very comfortable doing, other than taking outside jumpers.

"I think it goes to a comfort level of getting used to playing with guys like Jayson or Jaylen," Hauser said to reporters after the game. "I didn't really have much opportunity to do that last year in a game setting, so these first 10 games have been huge, and even preseason as well, to get a feel for what they like or where they like me to be, how they like me to help them, help me, I think it all ties into that."

So far this season when Hauser has played 20 minutes or more, his point average has bumped up from 7.9 per contest to 17 a game. He's currently shooting the ball at a 57.7% clip on 4.7 attempts from the floor and leads the team in 3-point shooting percentage at 53.3% on 4.1 attempts.
With Malcolm Brogdon (hamstring tightness) is set to sit out Friday night when the Celtics host the Denver Nuggets (8-3), look for Hauser to take advantage of most likely more playing time. NBA TV will have the tip-off from TD Garden beginning at 7:00 ET.
Joel Pavón
Follow @Joe1_CSP