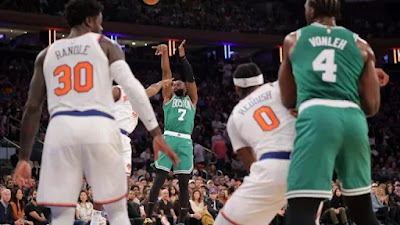 The Celtics have won two in a row as they beat the New York Knicks 133-118 at Madison Square Garden on a second night of a back-to-back Saturday.
Jaylen Brown finished with a game-high 30 points on 10-of-19 shooting, including 6-of-11 from deep, while Jayson Tatum added 26 points and hit 6-of-13 from behind the arc to lead the Celtics to a 6-3 record on the season.
Sam Hauser scored a career-high 17 points -- connecting on 5-of-8 from 3-point territory and Malcolm Brogdon added 14 points off the bench. Boston was 13-of-27 from long distance in the first half and 14-of-27 the final two quarters, as they set a franchise record for the most 3s made in a game with 27.

"We got a really good team who can really shoot the ball," Brown said in his postgame presser. "When we give each other the correct spacing and we get going like we did tonight, a lot of shots can fall."

"It felt amazing. Joe [Mazzulla] is just preaching to us, don't get tired, we're playing the right way," said Marcus Smart to reporters postgame, following an 11-assist performance to go along with 13 points (5-of-9 from the floor). "I think every coach preaches that, but to see it actually happen in action is a thing of beauty. It's good for us. It felt good for guys to hit shots. It's felt good for the team to see how we play and when we play that way the things we can do."

Al Horford sat out with lower back stiffness for the second time this season and Blake Griffin (seven points) started in his place.
Julius Randle netted 29 points and grabbed nine rebounds for the Knicks, who fell to 4-5. RJ Barrett added 27 points, while Jalen Brunson recorded a double-double of 22 points and 10 assists in the loss.
It was a tight game throughout the first three and a half quarters, before the Celtics took their first double-digit lead (116-105) after a pair of made free throws by Brown with 6:10 remaining.
The Knicks used a 7-0 spurt to get with four -- the closest they'd get the rest of the way -- but Boston went on a 8-2 run to pull away for good which was capped off with a Tatum 3-pointer to tie the franchise record of made 3s at 26 with 3:34 left to play.
Grant Williams (12 points) set a new team record with the 27th made 3 of the night in the final 14.8 seconds to put away the Knicks on their home floor.
The Celtics head to Memphis to face the Grizzlies (6-3) on Monday night, with tip-off at 9:00 ET.