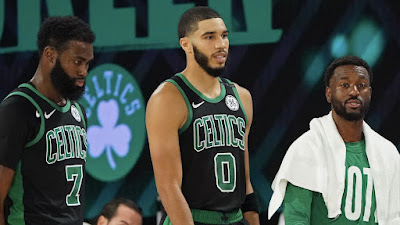 It hasn't always been positive during the five years that Jayson Tatum and Jaylen Brown have been teammates in Boston.
Despite the All-Star duo finally leading the Celtics to the NBA Finals last season, they started the 2021-22 campaign barely a .500 team at 25-25 in the first 50 games before turning it around and who can forget the year before that when the C's finished 36-36 -- only to get swept in the first-round of the playoffs?
Still, it wasn't that long ago when veteran guard Kemba Walker, who signed with the Celtics in the summer of 2019, gave the star pairing some strong advice throughout their struggles after joining a roster that had championship aspirations.

"I remember me telling those guys, because they've always seen the talks and everybody saying they can't play with each other, I always told them just block that out. I always told them, this organization isn't going nowhere without you two, literally," Walker said on ESPN’s "The Woj Pod." "My main thing to those guys was that they have to love each other. Jayson and Jaylen, you two guys have to come together as much as you can and lead this team to the promised land. They can't go anywhere without those two guys."

Despite being traded to the Oklahoma City Thunder for Al Horford following a disappointing 2020-21 season and being waived to eventually sign with the New York Knicks, Walker enjoyed watching the success of Tatum and Brown from afar as they helped the Celtics get over the hump to reach the Finals.

"Those two guys are so special and they showed it, they showed it," Walker said. "I was really proud of those guys because we definitely had some great convos between the three of us a lot. I'm not trying to take credit or anything of that nature because those two guys are just two special talents and special people. They made it work. It was really, really cool to see those guys in the championship last season."

While the Celtics are off to a great start this season -- winning their last sixth straight -- Walker has yet to suit up in the Detroit after being traded from the Knicks, where he was benched for the last few months of the 2021-22 regular season, in a salary dump. The former four-time All-Star is still awaiting a buyout from the Pistons as he looks to make his next move.
Walker has dealt with a nagging knee injury since the second half of his first season in Boston before being traded with two years remaining on a $141 million contract he originally inked with the Celtics. However, Walker says he has no qualms toward the franchise that gave him an opportunity to compete for an NBA title, even if it didn't work out due to his knee that never quite healed.

"I know how this league works," Walker said. “They treated me really well, that's something I can definitely say. But I know the situation was because of my knee."