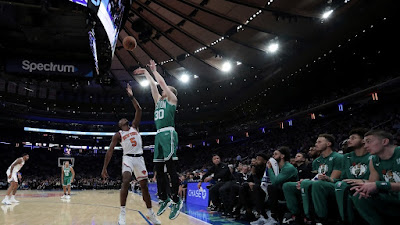 The Celtics were on fire from behind the arc Saturday, as they hit a franchise record 27 3-pointers to beat the New York Knicks 133-118 on a second night of a back-to-back at Madison Square Garden.
Despite playing without Al Horford, all nine that entered the game for the C's drained a 3, led by Jaylen Brown (30 points) and Jayson Tatum (26 points) -- who each finished with six apiece at a combined 12-of-24 shooting from deep.
Tatum tied the team record at 26 with 3:34 left to play and Grant Williams (2-of-4) broke the record with No. 27 in the final 14.8 seconds remaining in the fourth.

"For the most part, I thought we shot great threes," interim coach Joe Mazzulla said during his postgame presser. "Our guys are getting comfortable with the fact that when we run good offense and we have good spacing, and we read the defense, we're going to get a great look. I'd say when you're shooting that volume, there's going to be some tough ones, but for the most part, I think our guys do a great job of shooting the right ones."

Another huge contributor to the Celtics 27-of-51 (52.9%) night from 3-point territory was Sam Hauser, as he connected on 5-of-8 treys to score 17 points off the bench in 21 extended minutes.

Hauser, who's averaging 6.4 points on 57.1% from the field and 54.8% from 3, has taken full advantage of any playing time that has come his way -- staying ready whenever called upon.

"I think I still got work to do," Hauser said. "I know I'm going to be involved in a lot of actions, and I have to hold my ground a little bit better. So that's something I've got to work on, but overall, I think I'm getting better.
"Defense is tough, and something you can always be better at. So something I'm going to keep trying to do better. Watch some film, learn from it and grow from there."

Marcus Smart, who made 3-of-5 from 3 himself to go along with his 13-point, 11-assist double-double, says he and his teammates have seen the strides Hauser has made so far.

"They do go at him, and we tell him all the time to be expecting it," Smart told reporters postgame. "When we're in practice, we go at him to get him ready for how he's going to need to be able to handle himself, and we tip our hat off to him. He's doing a great job."

The Celtics are 6-3 on the season and look to make it three in a row when they face the Memphis Grizzlies (7-3) tonight on the road, as tip-off is at 9:00 ET.
Joel Pavón
Follow @Joe1_CSP