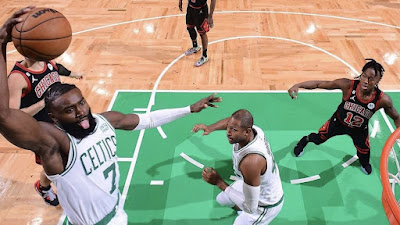 The Celtics beat the Chicago Bulls 123-119 at TD Garden Friday night to avenge last week's first loss of the season.
Jayson Tatum recorded another double-double of 36 points on 8-23 from the field, a career-high 17-of-20 from the free throw line and 12 rebounds -- helping the Celtics win two out of their last three and improve to 5-3 on the season.

"We've had some tough losses.," said Tatum in his postgame presser. "That's the sign of good team and we talked about that at shoot around. And to go out and do it on the same night shows our growth."

It was the eighth straight game that Tatum has scored at least 20 points, as he's now averaging 30.9 points per contest to start the 2022-23 campaign.
Malcolm Brogdon went 9-of-10 from the floor to score 25 points off the bench, while Jaylen Brown added 16 points in the bounce back win, after falling to the Cleveland Cavaliers in overtime Wednesday on the road.
DeMar DeRozan led all scorers with 46 points on 13-of-23 shooting and Nikola Vucevic had a double-double of 24 points, 12 rebounds. Zach LaVine chipped in 16 points and seven rebounds for the Bulls, who are back to .500 at 5-5.
Boston had a 93-87 advantage entering the final frame before using a 12-4 run to increase their lead to 105-91 -- their largest of the night with 7:10 left to play.
The Bulls responded with a 12-4 spurt of their own to cut the deficit to 109-103, which was capped off with a Vucevic 3-pointer. Despite Brogdon converting a 3-point play on the other end, Vucevic hit another from deep to make it 114-110 with 1:55 remaining.
Following a pair of made free throws by Derrick White and a wing 3 on Boston's next possession, Vucevic made another 3 to get the Bulls within two (117-115) in the final minute of the quarter -- the closest they would get the rest of the game.
Tatum went 3-of-4 from the free throw line to ice the victory, becoming the first Celtic since Paul Pierce in 2007 to attempt 20 from the charity stripe.
The C's head to New York to face the Knicks (4-4) at Madison Garden Saturday on the second night of a back-to-back, set for a 7:30 ET tip-off.