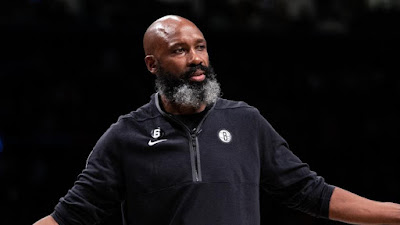 The Brooklyn Nets have moved on from pursuing suspended Celtics coach Ime Udoka and named Jacque Vaughn as their full-time head coach, according to Shams Charania of The Athletic.
The team made Vaughn acting head coach after parting ways with Steve Nash, only to remove the "acting" title over a week later, as they'll move forward without making another other changes.


Vaughn had been an assistant with Brooklyn since 2016 following two-plus seasons with the Orlando Magic as their head coach -- where he had a 58-158 record. Vaughn also had a 10-game stretch during the 2019-20 campaign where he ran the Nets' sideline as well.

"Jacque's basketball acumen, competitiveness and intimate knowledge of our team and organization make him the clear-cut best person to lead our group moving forward,” general manager Sean Marks said in a statement. "He has a proven ability to get the best out of our players, hold them accountable and play a cohesive, team-first style of basketball."

Udoka, who's currently serving a one-year suspension, was considered a front-runner to take over the Nets vacant head coaching gig following the firing of Nash. However, reportedly "strong voices" urged owner Joe Tsai from hiring Udoka in light of the team's turmoil, especially surrounding Kyrie Irving.
Irving was suspended for at least five games on Nov. 3 for his failure to disavow antisemitism. He has to carry out six items before being able to return and suit up for the Nets.
In the meantime, Brooklyn is 2-2 since Vaughn took over head coaching duties and 4-7 overall as the 11th seed in the Eastern Conference.
Joel Pavón
Follow @Joe1_CSP