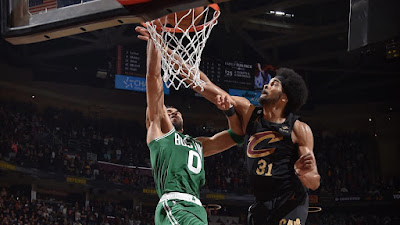 It was another thriller against Cleveland at Rocket Mortgage Fieldhouse Wednesday night, as the Celtics fell 114-113 in overtime for their second loss in less than a week to the Cavaliers.
Jaylen Brown, who missed a 19-footer as the potential game-winning field goal at the buzzer, led all scorers 30 points on 10-of-26 from the field (3-of-10 from behind the arc).

"It was pretty much get me the ball to make the play and I came up short," Brown said in his postgame presser about the final play. "Two seconds is enough time to get a good shot. I got a good look. It's a makeable shot."

Jayson Tatum netted 26 points, despite struggling 8-of-21 from the floor, to go along with 12 rebounds. Marcus Smart added 16 points, while Malcolm Brogdon scored 15 points off the bench for the Celtics, who are 4-3 on the season.
Darius Garland returned in his first game since Oct. 19 to finish with 29 points, 12 assists and Donovan Mitchell scored 25 points. Evan Mobley and Caris LeVert each contributed 15 points apiece, while Jarrett Allen recorded a double-double of 14 points, 14 rebounds in the Cavs' sixth straight win.
The Celtics were up but as much as 12 points in the third quarter, but Cleveland came back and took a 83-76 advantage into the final frame.
Boston used a 14-2 run to start the fourth and got back in front 90-85 with 8:08 left to play in regulation. For the rest of the period there were four different lead changes, before Tatum tied up 107-107 on a monstrous dunk with 6.7 seconds remaining and followed it up with his fourth block of the night as he swatted Mitchell's 23-foot step back jumper as time expired on the other end to send in into overtime.
In the extra session the home team jumped out to a 114-109 lead for good with 1:50 left to play, which including alley oop from Garland to Mitchell. Brown and Tatum responded with back-to-back unanswered buckets to get within one. Cleveland missed two field goals in the last 1:04, setting up one last play for Brown with 2.3 seconds left to play -- but missed jumper to seal the victory for the Cavs, as they improve to 6-1 and stole another OT win over Boston in the process.

"They're hungry and they want to make some noise," Brown said. "When you play against them, you've got to come ready to play, I'll tell you that."