Malcolm Brogdon to sit out against Nuggets with hamstring tightness 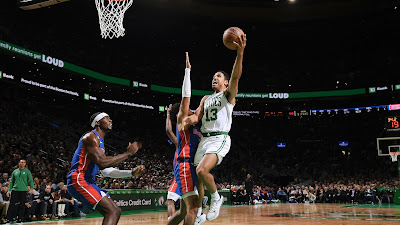 The Celtics have ruled out Malcolm Brogdon for Friday night's matchup against the Denver Nuggets at TD Garden, due to tightness in his right hamstring.
The veteran guard existed the game midway through the second quarter of the team's 128-112 win over the Detroit Pistons Wednesday night and did not return following halftime.

#NEBHInjuryReport for tomorrow vs. Denver:


This is the first tilt Brogdon will miss since being acquired by the Celtics this past summer, as the former Rookie of The Year hasn't played more than 56 games over the past three seasons. He's currently leading the C's bench by averaging 13.7 points per contest on 47.7% from the field and 36.8% from deep, to go along with 3.8 rebounds and 3.5 assists so far.
Over the past five games, Brogdon has bumped his season average to 17.0 points, 4.6 rebounds and 4.0 assists in just under 25 minutes.
Without Brogdon in the lineup, look for an increase of playing time for Sam Hauser and Payton Pritchard, as the Celtics at 8-3 are tied for second place in the Eastern Conference with the Cleveland Cavaliers ahead of tonight's face-off with the Nuggets -- who are also riding a four-game win streak and are 8-3 on the season.
Joel Pavón
Follow @Joe1_CSP