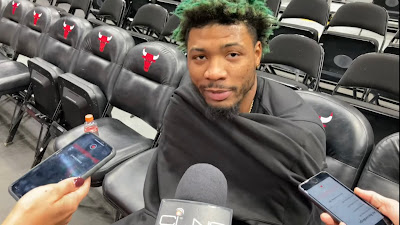 Celtics point guard Marcus Smart has been cleared to make his return into the starting lineup Monday night against the Chicago Bulls after a two-game absence with an ankle injury.
The veteran spoke at shootaround this morning regarding an MRI that revealed a "really bad bone bruise" in his right ankle -- which forced him to miss the C's two wins on the road over the Atlanta Hawks last Wednesday and the New Orleans Pelicans this past Friday.

"The swelling has reduced drastically for me so I'm able to put the pressure on it," said Smart to reporters following practice. "I was able to get out here and do some things to test it out and I passed all of the tests"

While there isn't any structural damage and surgery is not needed, Smart insists and reassured his teammates that had it been the playoffs, he would be on the floor playing. Still, it appears Smart will need days to recover throughout the remainder of the season -- meaning that going forward he'll essentially miss more games.
In the meantime, while Smart works his way back to full strength, Derrick White has been a formidable replacement -- averaging 10.8 points, 3.4 rebounds and 3.3 assists in 12 games as a starter with the C's so far this season. Those numbers have bumped up to 21 points, 4.0 rebounds and 5.5 assists in the two games Smart has missed.
Malcolm Brogdon has also made his way back, after sitting out four-straight with a sore hamstring, as he'll continue to lead the second-unit for the Celtics -- who have ripped off nine in a row and have the league's best record of 13-3 ahead of their matchup against the Bulls (6-10) at the United Center.
Joel Pavón
Follow @Joe1_CSP